SEOUL, Aug. 13 (Yonhap) -- U.S. Ambassador to South Korea Harry Harris said Monday that it is "too early" to move toward the declaration of a formal end to the 1950-53 Korean War, a demand Pyongyang has made apparently to help ensure the security of its regime.

His remarks appear to reflect Washington's position that the communist regime should first take tangible steps toward denuclearization, such as a declaration of its nuclear and missile programs, before any serious talks on the declaration of the war's end can emerge.

"The U.S. and our allies, especially the U.S. and the Republic of Korea, we have the same goal. ... That's the final, fully verified denuclearization of the Korean Peninsula. How will we get there is the hard good work of diplomacy in my opinion," he added.

Through its state media, Pyongyang has indicated that the end-of-war declaration is the first step to build trust and start in earnest what could be a lengthy denuclearization process. Seoul has also pushed for the declaration.

However, critics said that the reclusive state may want to use the declaration to help forestall any U.S. military action against it and reinforce its rationale against U.S. military presence in the South.

During his lecture, Harris reiterated a call for North Korean leader Kim Jong-un to fulfill his denuclearization commitments made during his summits with South Korean President Moon Jae-in in April and U.S. President Donald Trump in June.

"The North now has the chance to lift itself out of poverty for the past six decades. The potential for positive change in North Korea is limitless," the ambassador said.

"But only if Chairman Kim fulfills his commitments to denuclearize. Sanctions will remain in place until North Korea takes concrete and verifiable steps toward denuclearization. Our two nations are committed to choose the right deal, not just any deal," he added.

Asked about his past characterization of the North as "the most dangerous and volatile" threat, Harris said he wants to "focus on the future."

"What was unimaginable to me as a military commander has in fact happened," he said, referring to a flurry of peace efforts with the North.

"I want to focus on the future rather than dwell on the past. President Trump has confidence that Chairman Kim will abide by the agreements Chairman Kim made with our president in Singapore. So that is the new starting point from which we are going forward and that is where we find ourselves today," he added.

Touching on the concept of the rules-based order and the global commons, such as the freedom of navigation at high sea, he said that the U.S. would welcome any country that is supportive of it.

"Is there a role for South Korea to play? I will leave that to the government here to decide what that role appropriately is," he said. "But we welcome all countries who would support the concept of freedom of navigation in global maritime regions."

Harris arrived in Seoul last month to assume the ambassadorial post that had been vacant since his predecessor, Mark Lippert, stepped down upon the inauguration of Trump in January last year. 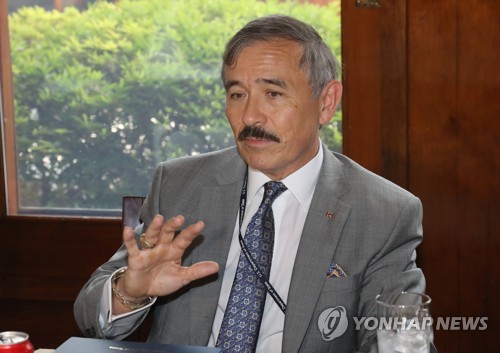