SEOUL, Aug. 13 (Yonhap) -- There will be no major changes to the state-run pension program without public consent, President Moon Jae-in said Monday, even to keep the national pension fund from being depleted.

"Changes to the national pension will be discussed under the principle of expanding post-retirement income. Also, I stress the fact that there will never be any changes to the national pension program by the government that lack public consent or social agreement," the president said in a weekly meeting with his top aides held in Seoul at the presidential office Cheong Wa Dae. 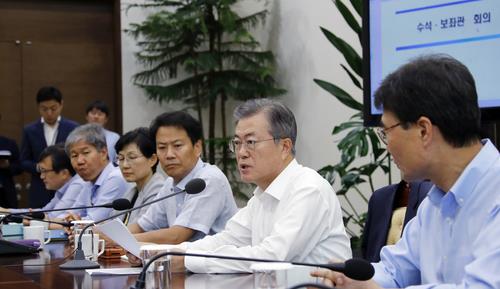 Moon's remarks follow recent reports that the state pension operator may soon announce plans to allow people to subscribe to the national pension program until the age of 65, a five-year extension from the current age limit.

The move is apparently aimed at boosting the inflow of fresh funds to the program, which is expected to run out before the end of 2057 if left untouched.

Earlier reports have suggested the National Pension Service may seek to further lower the income replacement ratio of the national pension, which started out at 70 percent in 1988 but is currently at 45 percent.

President Moon dismissed the possibility, at least for now.

"It is hard to understand how the government came to be known to be discussing ways to push back the starting age of pension payments or increase monthly premiums when the government's welfare policy is the exact opposite, which is to expand post-retirement income," the president said, according to Cheong Wa Dae pool reports.

Moon noted the government and the National Assembly are currently reviewing the national pension program, according to the law that requires such assessment every five years, but said any decisions or changes will only be finalized through legislation.

The president also stressed the need to actively seek changes should they benefit the people.

To this end, the president ordered the government to consider allowing new arrival duty free shops at major ports of entry.

"Last year alone, the number of our people traveling overseas reached over 26 million. But they are experiencing the inconvenience of having to carry what they buy at airport duty free shops throughout their entire trip because of the lack of arrival duty free shops," the president told the meeting.

"We talk about innovation but I do not believe innovation has to be something special. Correcting what is unreasonable in people's lives, no matter how big or small, is innovation," he added.