SEOUL, Aug. 13 (Yonhap) -- An advertisement video for South Korea's No. 1 carmaker, Hyundai Motor Co., has drawn a record 215 million views on YouTube, according to an ad agency Monday.

The video was produced by Innocean Worldwide Inc. to celebrate the 20th anniversary of the South Korean automaker's inroads into the Indian market, it said.

The five-minute advertisement surpassed 200 million views on YouTube since being released on June 27.

The video has also been recorded as the most-viewed among all ads for Hyundai Motor Group products, it said.

Another advertisement video for Hyundai Motor has registered 170 million views on YouTube, according to Innocean Worldwide.

Hyundai Motor's sales in India are expected to exceed the 500,000-unit mark for a third year in 2018 thanks to its diversified lineup, according to industry watchers.

Innocean Worldwide is one of South Korea's leading advertising agencies and is an affiliate of Hyundai Motor Group, whose flagship units include Hyundai Motor Co. and Kia Motors Corp. 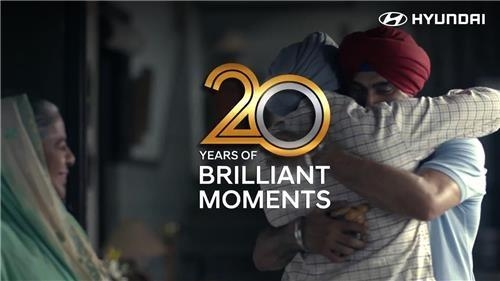