SEOUL, Aug. 13 (Yonhap) -- The executive head of South Korea's largest Buddhist order on Monday rejected calls for his immediate resignation over a series of corruption allegations.

Ven. Seoljeong, the executive chief of the Jogye Order of Korean Buddhism, said he will instead start working on a reform plan before leaving his current post at the end of this year.

"Despite any sorts of misunderstanding and allegations, I will resign from the post of executive chief on Dec. 31, 2018, after laying the foundation for the order's reform," Seoljeong said in a hastily called news conference.

"I was initially inclined to step down (immediately) for the sake of the order's stability, but decided that resigning would not be the best way for the order after witnessing the situation (of demanding my resignation) secretly and systemically led and coordinated by certain influential forces," he said.

The 76-year-old monk has been facing increasing calls for his resignation over a string of allegations that he forged his academic credentials, illegally owned a vast amount of real estate and secretly fathered a daughter against the sect's celibacy rule.

The allegations led many rank and file members of the Jogye Order and civic groups to stage protests demanding Seoljeong's resignation.

A reform-minded senior Buddhist monk, Seoljo, was taken to a hospital earlier in the month after a 41-day hunger strike in protest of the executive chief.

Seoljeong dismissed the allegations as "completely groundless and fabricated with an evil intention," vowing to take steps to clear them.

He took office in November last year as the chief executive officer of the Jogye Order for a four-year term. 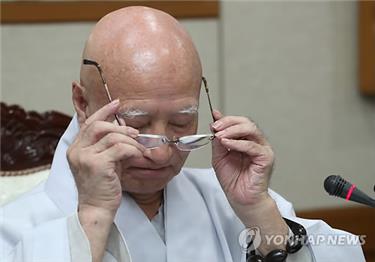