In the survey of 1,392 middle and high school students conducted by the National Youth Policy Institute on July 3-20, 19.8 percent said unification must be achieved on the Korean Peninsula.

Compared with a similar poll held a decade ago, the portion of young students advocating unification fell 11.4 percentage points, according to the institute.

The ratio of advocates of unification was higher among men, middle school students and urban dwellers, it noted. 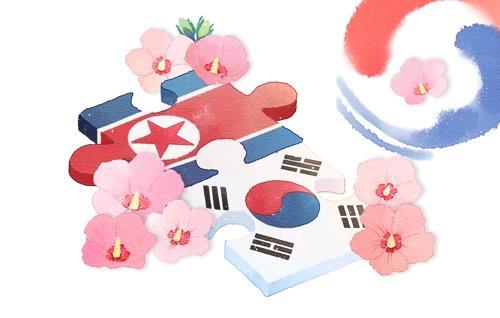 Moreover, students who consider themselves more well-off and interested in politics expressed a more positive viewpoint on unification.

Asked to pick reasons for unification, 43.6 percent cited elimination of war risk, followed by strengthening of national competitiveness (21.9 percent), restoration of national homogeneity (18 percent) and healing of the pain of separated families (12.9 percent), the poll found.

Compared with the 2008 survey, the portion of those who cite the elimination of war risk increased 23.9 percentage points and those who cite strengthening of national competitiveness dropped 9.6 points.

The young students' increased awareness of war risk was also reflected in their answers on the image of North Korea.

About 36 percent said the first thing that is associated with North Korea is nuclear weapons, with 22.1 percent citing dictatorship. Ranked between third and fifth were the same ethnic group (17 percent), socialist country (11.8 percent) and extreme food shortage (9.6 percent), the survey said.

About 80 percent said they were interested in a school field trip to the North and sightseeing there.

Only 2 in 10 young Korean students think unification is a must: poll

Only 2 in 10 young Korean students think unification is a must: poll