Net losses reached 918.59 billion won (US$809.68 million) on a consolidated basis in the April-June period, compared with a profit of 358.92 billion won a year earlier, the company said in a regulatory filing.

It was the first time in six years that the state utility firm posted operating deficits for three consecutive quarters.

"The operating profit turned to losses in the first half of this year despite increased sales of electricity as costs outweighed profits," Park Hyung-duck, KEPCO's chief financial officer, said in a briefing. "As profits are usually lowest in the second quarter due to seasonal factors, profits should improve in the latter half of this year."

Despite its worsening profitability, the state utility said it doesn't have plans to increase electricity prices for now, which is highly sensitive issue.

"Even if there are factors for raising electricity prices, we have to consult with the government and cautiously deal with the matter in consideration of inflation," Park said.

Although the government had planned to raise the nighttime industrial rate this year, it delayed the plan until next year due to local manufacturers voicing concerns over higher production costs.

The company said it expects better earnings in the latter half of this year as several reactors are set to go online after safety maintenance is completed in the coming months.

The operation rate of nuclear reactors stood at 63 percent in the second quarter, which is expected to rise to 76 percent in the latter half, the company said.

"We will carry out restructuring efforts and push for overseas projects to improve earnings," the company said.

Shares of KEPCO fell 1.27 percent to 31,150 won on the Seoul bourse. The earnings report was released after the market closing. 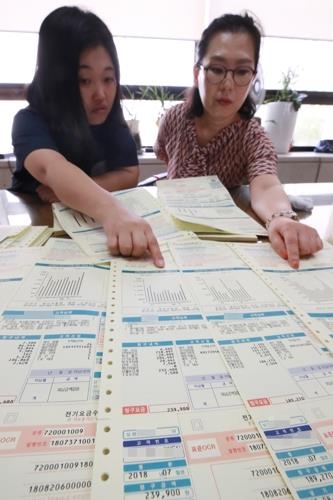