SEOUL, Aug. 13 (Yonhap) -- When South and North Korea compete as one in rowing and canoeing races at the upcoming Asian Games in Indonesia, viewers in South Korea won't be able to follow the action on television.

The Korean Broadcasters Association (KBA) said Monday that no feed for canoeing sprint and rowing events will be available during the Aug. 18-Sept. 2 Asian Games in Jakarta and Palembang, Indonesia. 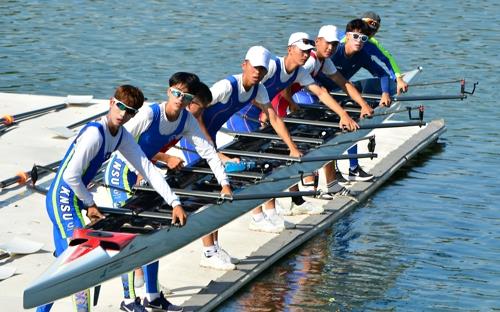 The Koreas have assembled joint teams in the men's and women's dragon boat racing, which is a canoeing discipline, and three events in rowing. The KBA said there will be no International Signal production for these events, along with a few matches or events in volleyball, baseball, football, yacht, modern pentathlon, golf, soft tennis and cycling.

According to the KBA, the decision was made by the local organizing committee and South Korea's rights-holding broadcasters had no say in the process.

In addition to canoeing and rowing, the Koreas will have a unified team in women's basketball, and those matches will be available on TV here.