SUWON, South Korea, Aug. 13 (Yonhap) -- A think tank affiliated with the government of Gyeoggi Province on Monday proposed introducing a twin city model for the co-development of South and North Korean border areas.

The Gyeoggi Research Institute said in a report that the development of the province's northern areas and North Korea's border regions can be modeled after the growth of twin cities along the United States-Mexico border.

Twin cities refer to a special case of two cities or urban centers that are founded and developed in close geographic proximity. In U.S.-Mexican twin cities, the border barrier is maintained and human exchanges are controlled, but cross-border economic cooperation is active. Typical twin cities between the two countries include San Diego-Tijuana and Yuma-San Luis. 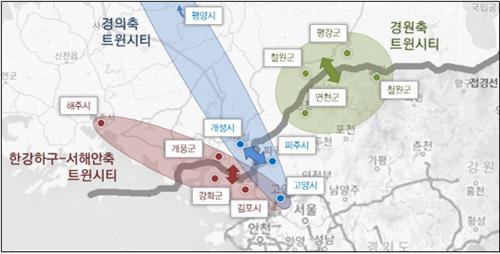 "If South and North Korea maintain different systems for the time being and promote peace and exchanges, it is necessary for them to pursue the U.S.-Mexico twin city development model considering the distance, topography and transportation routes among northern Gyeonggi Province cities," said Lee Jung-hun, a researcher at the institute.

The researcher envisioned Paju-Kaesong as the future economic hub of the Korean Peninsula, Gimpo-Ganghwa-Haeju as a coastal logistics and tourism center and Yeoncheon-Cheorwon-Pyonggang as an inland logistics and resort city.

"The twin city strategy will be critical to developing northern Gyeonggi Province areas into the future economic center of the Korean Peninsula," Lee said.

In U.S. border cities, employment growth is noticeable in the fields of finance, insurance and real estate, while Mexican border cities are active in machinery, electrical parts and manufacturing, the Gyeonggi institute noted.

The annual average population growth in the U.S. and Mexican border cities exceeded their national totals by 0.46 and 0.06 percentage points in the 2010-2015 period, respectively, it added.