Moon made the comments during a weekly meeting with his top aides, adding that tourists currently have to carry around the items they purchased before departure during their whole trip due to the absence of duty free shops in the arrival halls of airports.

He also pointed out that arrival duty free shops could raise domestic spending both by locals and foreign visitors.

Industry watchers called for thorough coordination before making a final decision as there are different voices from various stakeholders, including major duty-free firms that are already operating stores in departure halls, as well as airlines that sell in-flight duty-free products.

"We are just worried that it would end up dividing a small pie instead of expanding the whole size of the pie," an industry source said, asking not to be named.

Smaller duty-free operators, meanwhile, welcomed the government's move, as the new outlets, if opened, will likely go to those small and medium-sized firms.

Moon ordered his aides to review ways that could benefit the SMEs during Monday's meeting.

"Considering that the original purpose of duty-free stores is to improve tourists' convenience and boost sales of local brands, the operation of duty-free shops at arrivals halls should be promptly implemented," a company official said. 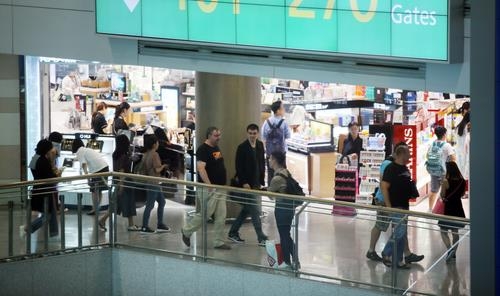