INCHEON, Aug. 13 (Yonhap) -- Though they've only been training together for a dozen days, the players on the joint Korean women's basketball team are firmly united in the pursuit of a common goal at the Asian Games, their head coach said Monday.

"It feels like we've been together for three, four months," Lee Moon-kyu told reporters at Incheon International Airport before taking his team to Jakarta for the Asian Games. The opening ceremony is Saturday, but the unified Korean team's first preliminary game is Wednesday against Indonesia.

"I think that's because the North Korean players have shown so much determination, and the South Korean players are the same way," Lee continued. "So I expect them to do some good things at this competition." 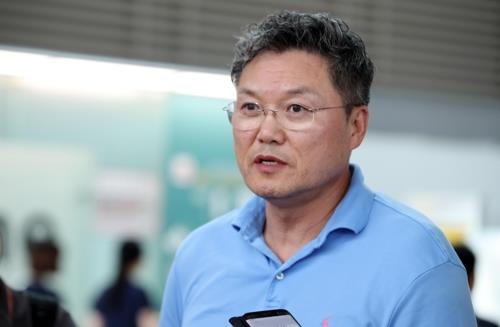 South Korea won the previous Asian Games gold medal in 2014. On the unified team this year, there are eight South Koreans and three North Koreans, with the status of one South Korean player, center Park Ji-su of the Las Vegas Aces in the Women's National Basketball Association (WNBA), still in limbo. Of the three North Koreans, Lee said center Ro Suk-yong may have the most to offer.

"She is a great ball handler, and she has also proven to be a quick study," Lee said. "She's solid in all aspects of the game. She'd be a top-level player if she competed in the South Korean league."

When the two Koreas met in a friendly game in Pyongyang on July 5, Ro scored a game-high 32 points in the South's 81-74 victory. At the 2017 International Basketball Federation (FIBA) Women's Asia Cup, Ro led everyone in scoring by averaging 20.2 points per game.

After Indonesia, Korea will face Taiwan on Aug. 20, India on Aug. 24 and Kazakhstan on Aug. 26 in Group X action.

The top four teams from Group X will advance to the quarterfinals, joined there by the top four from Group Y, made up of China, Japan, Thailand, Hong Kong and Mongolia.

Lee said the team is very much prepared to compete with 11 players on hand without Park, who is averaging 2.9 points and 3.4 rebounds per game in her first WNBA season.

"If she can join us and show us a willingness to compete, then our team will be that much better," Lee said of the 19-year-old.