Son arrived in Bandung, Indonesia, to play for South Korea at the Asian Games following Spurs' 2-1 win over Newcastle United in their English Premier League opener on Saturday. He was the last South Korean footballer to report to the U-23 national team. The other 19 South Korean players arrived in Indonesia on Saturday.

"On my flight to Indonesia, I thought a lot about the Asian Games," Son said to reporters at Husein Sastranegara International Airport in Bandung, Indonesia. "I feel more responsibility as a wild card member and I have to play a good game."

Son, 26, is one of the three wild card players for South Korea at the Asian Games. The other two are Daegu FC goalkeeper Jo Hyeon-woo and Gamba Osaka striker Hwang Ui-jo.

The men's football competition at the Asian Games is open to those who are aged 23 or under, but teams can field up to three players, known as wild cards, who are over the age limit.

Son said his hectic schedule and long flight to Indonesia won't cause a big problem.

"I'm still young, so I feel alright," he said. "I just have to overcome jetlag. It's an excuse to say that I feel tired because of the long trip." 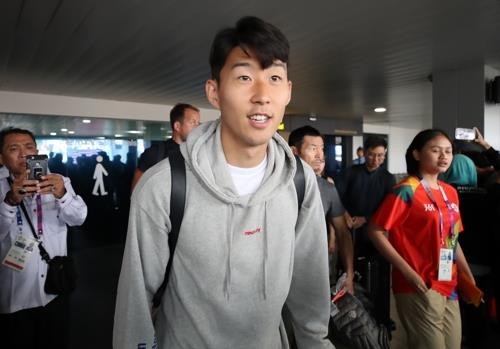 "I have to get friendly with other younger teammates," he said. "I'll approach them first and will give them some advice. It's my job to help my teammates to play their best game."

South Korea are considered favorites to win the Asian Games. The Taeguk Warriors are looking to defend their Asian Games title. They have been placed with Bahrain, Malaysia and Kyrgyzstan in Group E.

"It's a long journey to the final," he said. "It's important for us to think that every match is the final."

Son said South Korea should not let their guards down against weaker Asian opponents.

"Like we beat Germany at the World Cup, we could also lose to other Asian teams," he said. "Football is a sport in which 11 players compete. We need to stay focused." 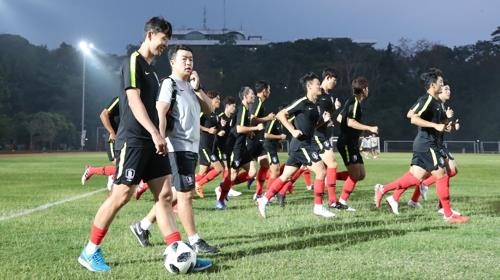 Son earned permission from Tottenham to play for the U-23 side and he is looking to earn military service exemption by winning a gold medal at the Asian Games.

All healthy men between 18 and 35 must serve about two years in the armed forces. But athletes who either win an Asian Games gold medal or any Olympic medal receive exemptions and only have to undergo four weeks of basic training.