"The issue of comfort women for the Japanese military can truly be resolved when the victims' dignity and honor are restored and their broken hearts are healed," Moon said in a ceremony marking the designation of a new national day for comfort women.

The issue has long been a source of dispute between South Korea and Japan as Tokyo flatly denies any coercion in mobilizing the former comfort women, calling them voluntary prostitutes. 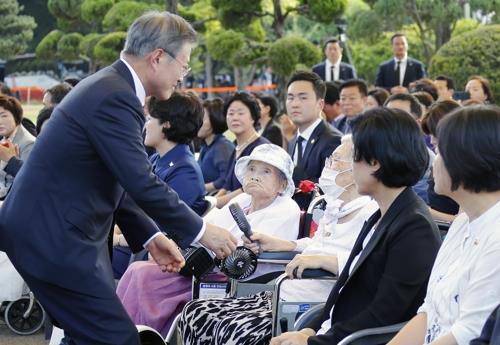 Moon expressed hope the issue will no longer be a source of diplomatic friction between the two countries.

"I hope this issue will not lead to a diplomatic dispute between South Korea and Japan. I do not even believe it is an issue that can be resolved through a diplomatic solution," he said.

His remarks, however, apparently reaffirmed his rejection of a 2015 deal between Seoul and Tokyo, under which South Korea's former Park Geun-hye administration agreed to put the issue in the past once and for all in exchange for 10 billion Japanese yen (US$9 million).

Moon earlier declared the agreement "seriously flawed," noting the agreement did not reflect key demands of the comfort women themselves, which include a sincere apology from the Japanese government.

"The government will do its utmost to maintain communication with the victims. It will respect the victims as key players in addressing the issue in line with the human rights regulations of the international community that advocate victim-oriented settlement," he told the ceremony.

"It will also do its utmost in projects aimed at restoring the honor and dignity of the victims," the president added.

Tuesday's ceremony marked the inauguration of the new national day, which will be observed annually on the day before the Aug. 15 Liberation Day that marks the country's liberation from the 1910-45 Japanese colonial rule.

The ceremony was held at a national cemetery in Cheonan, South Chungcheong Province, involving a handful of surviving former comfort women.

The president also urged his own people to move beyond the decades-old issue and help those facing the same atrocity today.

"Now, we must overcome our painful wounds and work to realize the common values of global peace and women's rights," the president said.

"It is an issue that will only be resolved when we ourselves and the entire world, including Japan, deeply reflect on ourselves about sexual violence against women and their human rights, and take the issue as a lesson never to repeat the same mistake again," he said.