JAKARTA, Aug. 18 (Yonhap) -- South and North Korea marched together at the opening ceremony of the 18th Asian Games in Jakarta on Saturday, marking the second time in six months that the two were united behind one flag at an international sporting competition. 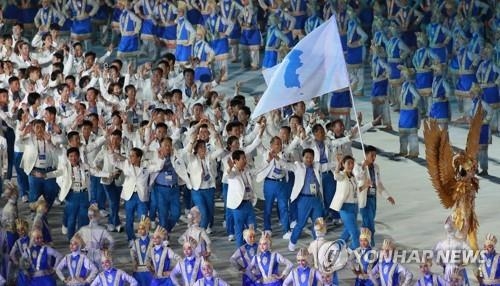 In February this year, the Koreas also had a joint march at the opening ceremony for the PyeongChang Winter Olympics in the South.

This was the 11th joint Korean march at a global multi-sport competition, and the first such occasion at an Asian Games since the 2007 Winter Asiad in Changchun, China.

The Koreas will also compete as one entity in women's 5-on-5 basketball, dragon boat racing -- a canoeing discipline -- and three events in rowing.

According to the organizers, South Korea has sent 807 athletes, and North Korea has 168 athletes here.

There are 45 participating nations, but 44 marched at the opening ceremony after the two Koreas were combined as simply "Korea."

They were lined up in alphabetical order, with Afghanistan leading off the parade. Korea was the 15th to enter the stadium. Indonesia, as is the custom for host nations, was the last to join the parade. 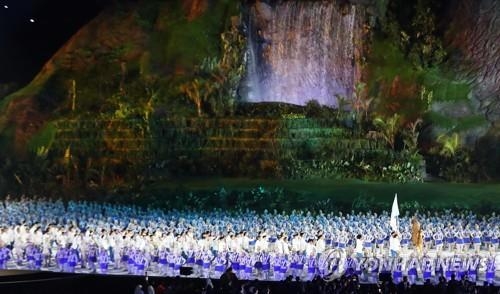 The Korean athletes and officials received a huge ovation from spectators, who were also busy trying to capture the moment on their phones.

North Korean basketball player Ro Suk-yong, a member of the unified women's team, was also shown on the screen. She smiled and waved at the crowd once she realized thousands of eyes were on her.

The latest joint march was yet another watershed moment in the inter-Korean sporting relations that have been improving since the beginning of the year.

North Korea's last-minute decision to participate in the PyeongChang Winter Olympics and also have a joint march with South Korea paved the road for further sports exchanges. The two also formed a joint women's hockey team in PyeongChang -- the first unified Korean team in any sport in Olympic history.

Talks on fielding unified teams at this year's Asian Games began months in advance, and in the meantime, the Koreas competed as one in table tennis at two different international events -- once in South Korea in July.

The Koreas are technically at war because the Korean War ended in 1953 with an armistice, not a peace treaty. 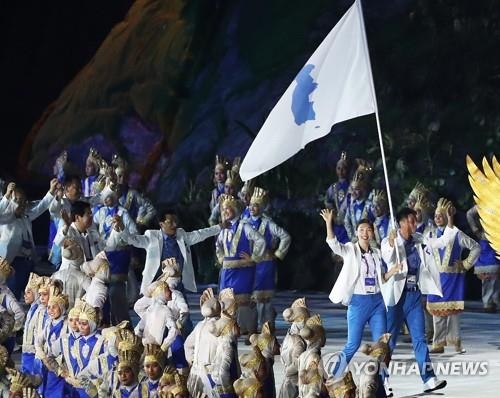