SEOUL, Aug. 24 (Yonhap) -- A Seoul appellate court is set to rule on the corruption case of ousted President Park Geun-hye on Friday.

The Seoul High Court's planned verdict comes after a lower court convicted her of corruption and sentenced her to 24 years in prison with an 18 billion won (US$16 million) fine on April 6. The sentencing hearing is scheduled to begin at 10 a.m.

Park, 66, was indicted for conspiring with her longtime confidante, Choi Soon-sil, into forcing big conglomerates, including Samsung, to donate 77.4 billion won to two foundations under Choi's control.

The scandal led to her ouster by the Constitutional Court in March last year.

Prosecutors maintained their demand for a 30-year jail term and a 118.5 billion won fine for Park in the last hearing held on July 20.

The court on Friday will also deliver its rulings on Choi and Ahn Jong-beom, Park's former chief policy aide. They were sentenced to 20 years and six years in prison, respectively.

Park is unlikely to appear for the trial. She has been boycotting what she calls "politically motivated" court proceedings since last October, when the court extended her presentencing detention.

She blames the judiciary and prosecution for not handling her case fairly.

Park's last sentencing trial at the lower court was televised live after the court agreed to it citing the public's right to know. The appeals court has decided against it for Friday's trial, saying the defendant's right to refuse the live broadcast should be respected. 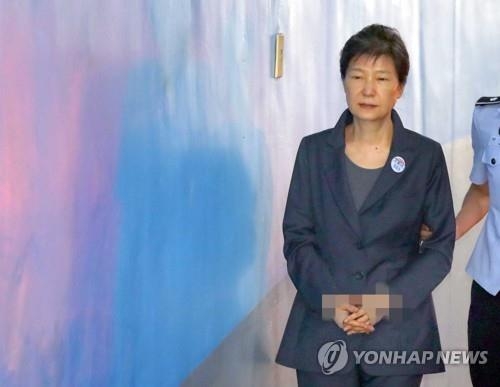 Appeals court to rule on ex-leader Park in corruption trial

Appeals court to rule on ex-leader Park in corruption trial