SEOUL, Aug. 28 (Yonhap) -- Police commandos used anti-terrorist weapons, such as stun guns and multipurpose launchers, when breaking up a 2009 strike by Ssangyong Motor workers under an operation authorized by the office of then-President Lee Myung-bak, a truth committee said Tuesday.

Unionized Ssangyong workers went on strike in May 2009 in protest of the management's restructuring plan and seized the assembly plant in the city of Pyeongtaek for two and a half months. The 76-day strike ended when police went in and broke it up. 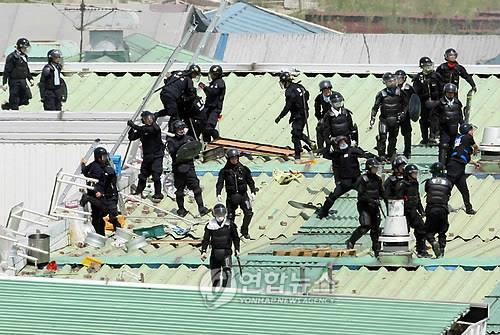 Unionists have since accused police of excessive use of force, claiming that such dangerous weapons as stun guns and multipurpose launchers, which are designed to shoot rubber bullets and sponge bullets, shouldn't have been deployed.

A truth committee tasked with investigating alleged human rights violations involving police looked into the accusations and announced Tuesday that police not only used those weapons but also sprayed about 200,000 liters of tear gas liquid with cancer-causing ingredients over unionists from a helicopter.

The committee said it runs counter to police regulations to use anti-terrorist weapons and spray tear gas liquid over unionists, but it is impossible to punish those responsible for power abuse and other charges because the statute of limitations has already expired.

The committee recommended police offer an apology and come up with measures to prevent similar cases from happening again. It also recommended the state withdraw the lawsuits filed to demand unionists provide compensation for the damage they allegedly inflicted on police assets during the clash.

The committee also found that the Gyeonggi Province Police Agency, led by then-chief Cho Hyun-oh, worked closely with Ssangyong's management for months to draw up detailed action plans to break up the strike.

Cho mobilized force after winning approval from the then-presidential office without reporting to his boss and national police chief Kang Hee-rak. Kang, who opposed using force at the time, was left in the dark when massive police force went in to break up the strike, the committee said.

"This case shows the negative effects that can occur when labor disputes are forcefully resolved by police when they should be resolved voluntarily between labor and management," the committee said. "This should set a precedent that police should guard against when deciding to use force for labor disputes in the future."
(END)