SEOUL, Sept. 3 (Yonhap) -- Four years before Cho Seong-jin was brought to the attention of the world classical music scene with his victory at the Chopin International Competition in Warsaw in 2015, the solo pianist had his first orchestral performance with the Seoul Philharmonic led by Maestro Chung Myung-whun to stage Mozart's piano concerto No. 20 in D minor.

Seven years after their collaboration, the duo will pair up again to stage the same Mozart piano concerto at Seoul Arts Center in December in a gala concert to celebrate the 120th anniversary of the longest-running classical record label, Deutsche Grammophon (DG).

"This Mozart piano concerto is something that I have been playing continuously since 2011," Cho said in a press conference in Seoul on Monday. "My first joint orchestral performance was with the Seoul Philharmonic Orchestra and Maestro Chung Myung-whun in January 2011. I am very pleased to be performing the Mozart piece with the Seoul Philharmonic and with Chung for the first time in eight years."

Cho's performance scheduled for Dec. 6 will come days after the release of his third studio album with DG, which has an exclusive record contract with Cho, in late November. The upcoming album will feature works by Mozart.

"What I could call the top priority when I record is to come up with music pieces that I am very familiar with and very good at," he said.

"It is very difficult to know what they are, but I chose the Mozart concerto and Mozart sonatas (for the upcoming record) because they are familiar to me as I have played them since I was 10 or 11 years old," he added.

"I am not 100 percent satisfied with the recording result, but the latest one feels better than my previous one because I am adapting to the form of studio recording," Cho said.

"I was 16 or 17 at (the time of the first joint concert), and I may have changed since then. But still I have a similar attitude toward music and the audience may better notice how I have shifted," he also noted.

"As far as I know Cho has played the biggest number of concertos with the Seoul Philharmonic as a soloist. We chose him because he, at such an young age, was already an almost perfect pianist," Chung said, recalling Cho's first performance with his former orchestra. 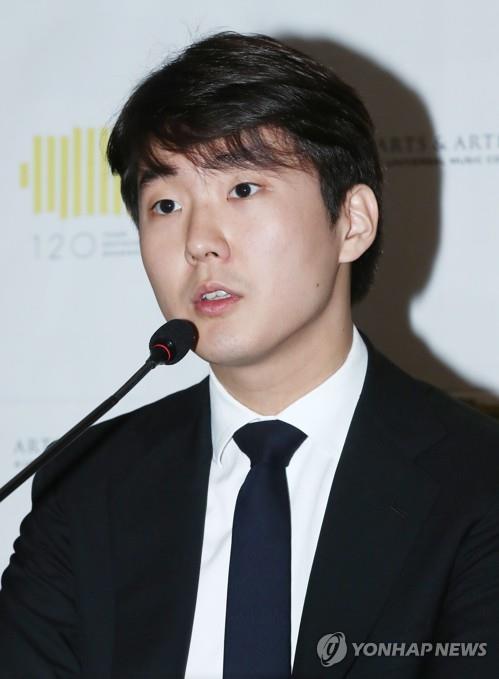 Also as a pianist himself, Chung extolled Cho for his "speedily and easily" expanding repertoire.

"It is the most delightful and satisfying moment for musicians to see young generations doing well, as if they are delighted with the success of their own children," Chung said.

The maestro is gratified to be reuniting with the Seoul Philharmonic, which he conducted for nearly a decade.

"There's a difference between working as the chief music director and a guest director. A music director has to take the heavy responsibility of how to keep developing his orchestra. I have done that for a long time and don't want such responsibility anymore," he said. "Compared to the (previous) time, I am now very carefree (conducting as a guest)."

The Cho-Chung concert is one of a series of high-profile concerts DG will be throwing in German and Asian cities to celebrate the 120th anniversary of the company's founding in Hanover, Germany.

DG is the oldest surviving record company. The label is famous for its records of legendary conductors like Herbert von Karajan and Leonard Bernstein, as well as contemporary virtuoso conductors such as Chung.

"It's not a coincidence that we are celebrating here in Korea," DG President Clemens Trautmann said in the press conference. "Korea is a very important market for DG and actually the very inspiration to celebrate the 120th year comes from the Korean team," he said, referring to Korean artists associated with his label.

"So it makes a lot of sense to celebrate here and (this) part of the celebration will not only be the gala concert, but also a series of Yellow Lounge (concert) events and touring of our international artists," he noted.

Trautmann stressed the importance of contemporary artists' "power of imagination" that could bring "something new" to the existing collection of music recordings at a time when any recorded music can easily be streamed on a smartphone.

The Seoul gala concert will also include a joint performance by Chung and Ann-Sophie Mutter, a DG-associated violinist and four-time Grammy winner, set for Dec. 7 also at Seoul Arts Center. 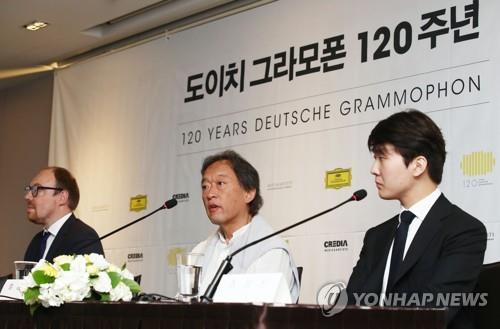