The Tottenham Hotspur forward joined the under-23 team at the Asian Games as one of three overage players and served as captain. The coaches said Son has shown his maturity and leadership throughout the tournament.

"He is now mature and knows when to stop and when to go forward," South Korea's under-23 football head coach Kim Hak-bum said during a press conference at the Korea Football Association (KFA) House in Seoul.

"In one match, I asked Son, 'Why didn't you take a shot?' and he answered, 'I want to give it to my teammate who was in better position,'" Kim continued. "He wasn't really trying to show off during the competition, but he sacrificed for the team. He is going to have big development as a player." 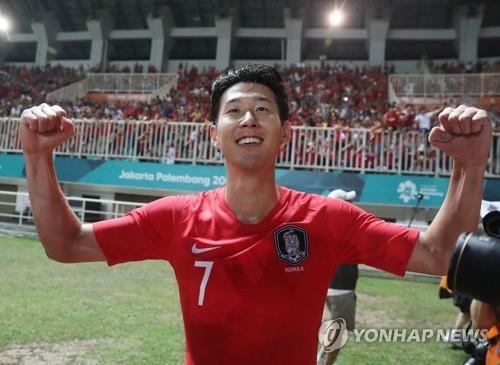 Coaches also gave credit to Son for encouraging and motivating his younger teammates.

"He did some of the work that coaches need to do," said Kim Eun-jung, an assistant coach for South Korea. "There are moments that work better when a player says something to his teammates, and Son played lots of roles. He did everything as captain."

Lee Min-sung, also an assistant coach, praised Son for his work ahead of the final against Japan.

"During our playing days, the match against Japan was like a war, so coaches didn't really talk much because each player knows what to do," he said. "But these days, it's more like a match. So I told Son you should speak to your teammates about the importance of the match and he did very well."

At the Asian Games, Son only scored one goal, but he provided four assists. Instead, his teammate Hwang Ui-jo stepped up, scoring nine goals in seven matches to become the top scorer.

Head coach Kim said he believes Hwang can play even better with the senior national team. Hwang was recently named to South Korea's roster for friendly matches against Costa Rica and Chile.

Kim and Hwang previously worked together at Seongnam FC, and when he selected the Gamba Osaka striker for the Asian Games, there were criticisms that the coach had made the decision based on his past relationship. But Hwang has since silenced his critics with his superb goal-poaching.

"I had believed that he could do something," Kim said. "He has become a better player than he was with Seongnam. He is now mature and I think he will extend his good form." 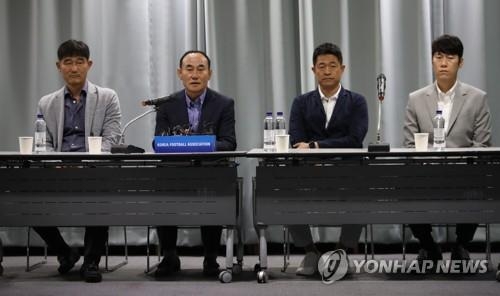