SEOUL, Sept. 12 (Yonhap) -- The seventh season of music cable channel Mnet's rap competition show "Show Me the Money 777" has made a solid debut on the weekly TV chart.

The popular competition show has drawn 13,000 applicants for the latest season in which a winner earns 200 million won (US$177,000) in prize money. With a bigger talent pool, the show boasts more competent rappers than previous editions.

Premiering in 2012, the show is credited with having made the Korean music scene more diverse and increased the public's interest in hip-hop and rap in particular. 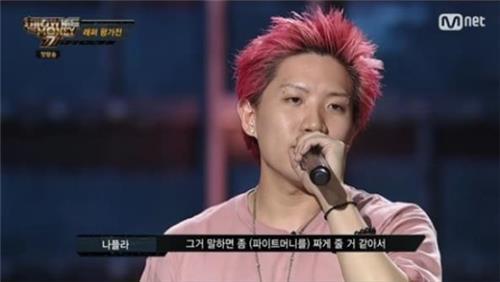 There is no first preliminary round this time, and the producers select successful candidates through audition videos instead. Among some highly competitive rappers, Napola has drawn more than 1.1 million views for his video.

The first episode garnered a viewership rating of 1.6 percent, lower than the 2.2 percent of the sixth season, but the level of trending on social media platforms seems to be stable.

Meanwhile, "Mr. Sunshine," an epic period drama about the confusing times in the early 1900s, topped the chart with a score of 284.5. The tvN show has only four more episodes to go before finishing up.

'Show Me the Money 777' makes splash, ranking No. 2 on weekly TV chart on its debut

'Show Me the Money 777' makes splash, ranking No. 2 on weekly TV chart on its debut