Last November, the Moon Jae-in administration declared its core diplomatic policy of improving strategic ties with countries located southwest of the peninsula, mainly the members of ASEAN and India. 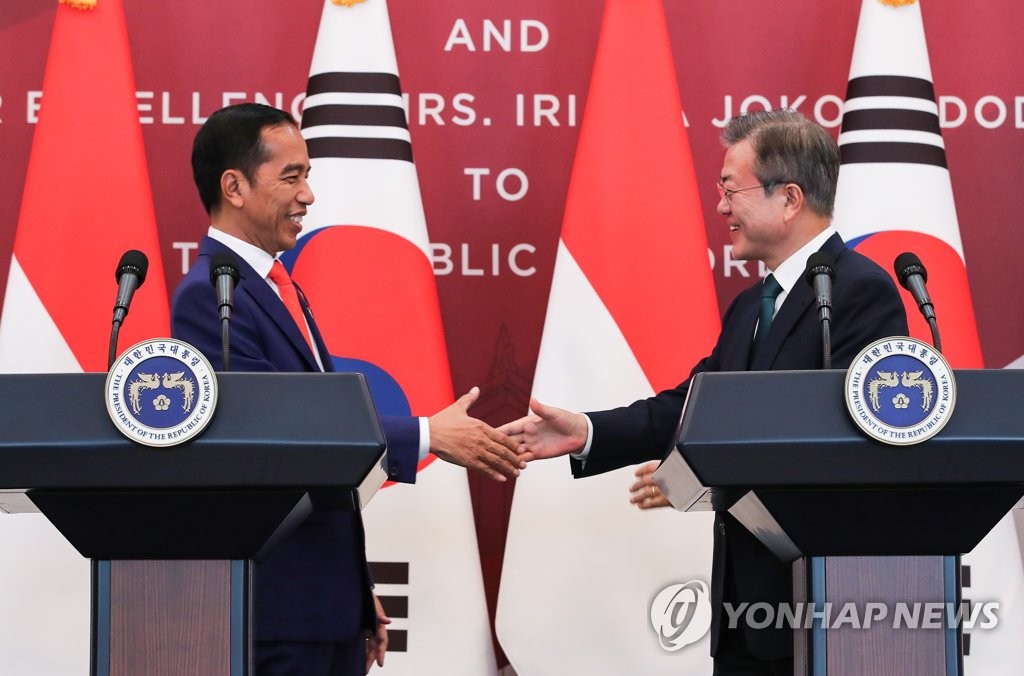 The government earlier launched a special presidential committee on the vision. Led by Kim Hyun-chol, Moon's economic policy advisor, it is the de facto control tower of Seoul's efforts to put its relations with other Asian countries on a par with those with the four regional powers -- the U.S., China, Russia and Japan.

The first and foremost goal is to diversify South Korea's portfolio of external economy and trade.

To South Koreans, the huge impact of a political row with China over the deployment of the THAAD missile defense system served as a wake-up call. While dependent on the U.S. for security, South Korea relies heavily on China economically. 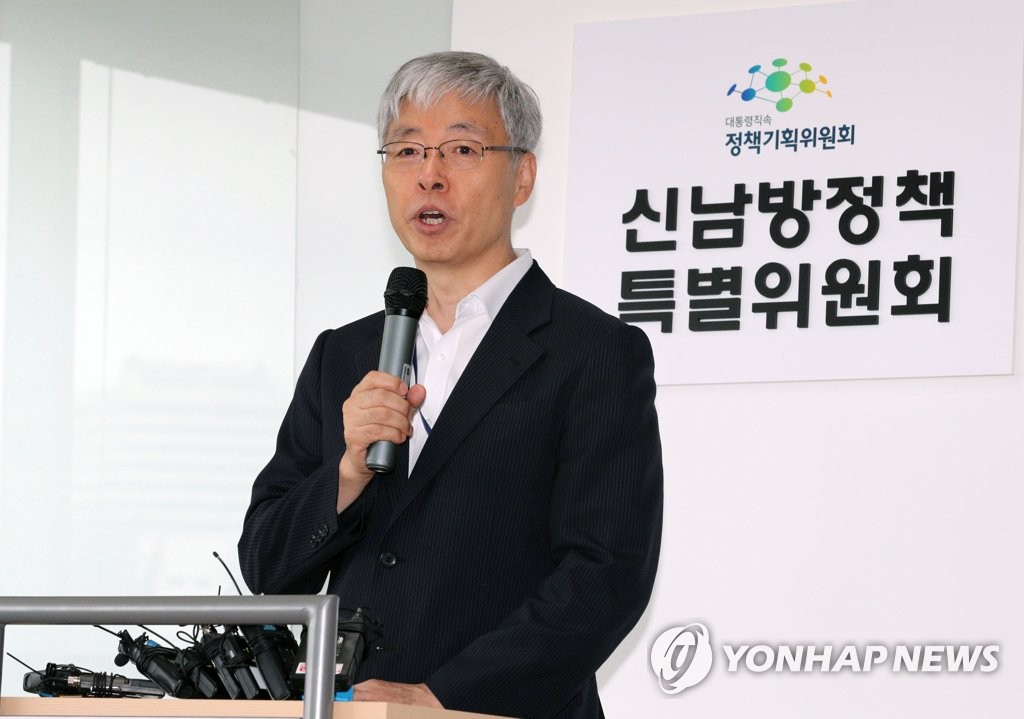 "South Korean can build up a buffer against potential fallout from a conflict between the U.S. and China," Choe Wongi, head of the center for ASEAN-India studies at Korea National Diplomatic Academy, said in an interview.

Concerns have grown that small nations and middle powers in the region may be forced to choose between the two, as shown in the case of the Beijing-led Asian Infrastructure Investment Bank (AIIB).

Branching out strategic partnerships into ASEAN and the Indian Ocean would offer diplomatic leverage and help widen wiggle room from the perspective of regionalism and multilateralism, the professor pointed out.

In that sense, the Moon government is sincere and serious about the New Southern Policy -- it is not just rhetoric or lip service.

The three key words of the policy are people, prosperity and peace.

They suggest a broader approach, one differentiated from Seoul's campaigns to reach out to ASEAN or India under previous governments, which were largely about expanding export markets.

"The new vision revolves around the pursuit of a win-win and co-prosperity on the basis of mutual trust," Choe added. 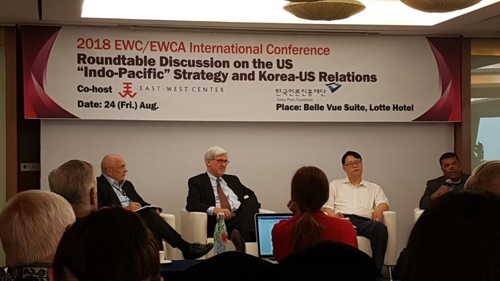 The ASEAN bloc, with a population of 630 million, now boasts a 2.7 trillion-dollar GDP. It's South Korea's second-largest trade partner, with two-way trade totaling $149.1 billion in 2017, rising from $118.8 billion the previous year.

India has also emerged as an important partner for South Korea, not just in the sale of goods but for security and defense cooperation.

On a state visit to India in July, Moon reaffirmed South Korea's support for India's bid for membership of the Nuclear Suppliers Group (NSG).

Many agree that South Korea's New Southern Policy and India's Act East policy, a follow-up to its Look East one, are compatible.

What's more challenging for Seoul is to make its scheme chime with Washington's Indo-Pacific strategy and Beijing's Belt and Road project.

Until recently, in particular, South Korea had been equivocal about the Donald Trump administration's still nascent approach.

"Honestly speaking, it's hard to say that we are actively supportive," a foreign ministry official told Yonhap. "But we are open to finding common ground between the Indo-Pacific strategy and the New Southern Policy. It's applicable to China's Belt and Road as well."

Asked if it's fair to view Seoul's stance on Washington's strategy as "conditional or cautious support," the official said yes.

The U.S. policy is widely regarded as aimed at countering China's sprawling influence.

For some, it was also reminiscent of the U.S. push for a regional missile defense program or the quadrilateral security cooperation among the U.S., India, Japan and Australia.

As Washington's strategy has just begun to shape up, it's apparently placing an emphasis on development cooperation, at least for now, to offer an alternative to what many see as China's massive loan-based approach to energy, infrastructure and digital economy.

He announced $113 million in "down payment" for the program in which Washington hopes the private sector will eventually play a major role, in contrast to China's government-driven operation. 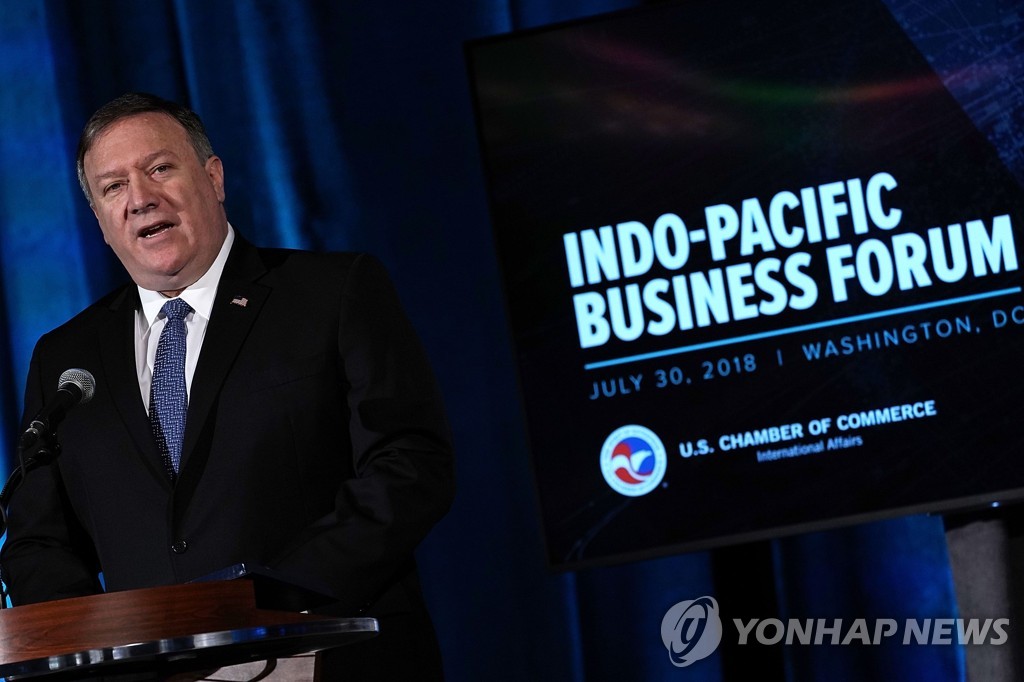 Washington's focus is on rules-based order, and its message is "Let's play by the rules, and China is no exception," Choe said.

During his trip to Seoul in late August, Deputy Assistant Secretary of State Walter Douglas briefed South Korean foreign ministry officials and a group of scholars on the action plan.

Choe believes the U.S. has opted to concentrate on economy in consultations with Japan and Australia as part of efforts draw broader backing from other nations that want to avoid rifts with China.

"If the U.S. sticks to the current approach, South Korea doesn't need to be too defensive," he stressed. "We should try more actively for synergy between the New Southern Policy and the Indo-Pacific strategy, (which has bipartisan support on Capitol Hill.)"

It could be a good opportunity to bring the alliance to a new level, he added.

South Korea's vision is apparently dwarfed by the parallel approaches of the U.S., China and Japan in a world where money talks.

However, South Korea has such other weapons as its post-war development experience and the popularity of so-called K-culture, or Korean Wave.

"South Korea is a relatively benign partner in the eyes of people in ASEAN. And there's less historical baggage," he said. "Over the mid- to long-term, the New Southern Policy will spread to other Indian Ocean countries including Bangladesh and Sri Lanka."

Shawn Ho, an expert based in Singapore, said Southeast Asian countries and India welcome the Moon administration's initiative, citing their desire for long-term cooperation with South Korea for mutual benefits.

"To make this New Southern Policy a success, President Moon and his team of advisors will need to come up with more concrete plans on how exactly their government intends to pursue this policy," Ho, a security researcher at the S. Rajaratnam School of International Studies of Nanyang Technological University, said in an email.

He advised them to dedicate more resources to grooming and training young professionals with "deeper expertise, experience and knowledge of each Southeast Asian country" so as to serve as "bridges" in various fields.