SEOUL, Sept. 17 (Yonhap) -- A team of civilian, government and military experts has tentatively concluded that defects in the rotor mast caused the July crash of a marine chopper that killed five troops, a source said Monday.

The team reportedly explained the interim results of its investigation to the families of the victims on Sunday. The military authorities had planned to explain the results to the media on Monday, but delayed the plan to Friday.

The MUH-1 Marineon, the Marine variant of the KUH-1 Surion helicopter, crashed shortly after a maintenance checkup at a military airport in the southeastern city of Pohang on July 17. It was seen falling after its rotor blades became separated from the fuselage just seconds after takeoff.

Investigators apparently believe that cracks were created in the rotor mast due to a flawed heat treatment process by a subcontractor.

The team plans to verify their investigation outcome with foreign experts who participated in the investigation into the crash of the Super Puma helicopter in Norway in 2016.

The tentative investigation outcome raised the need to look into the Surion helicopters as well, which use the same rotor mast. The South Korean Army runs the Surion fleet.

The Marines received the helicopters in January with a plan to introduce 28 Marineons by 2023. Following the accident, the Marine Corps and Army have grounded all Marineons and Surions. 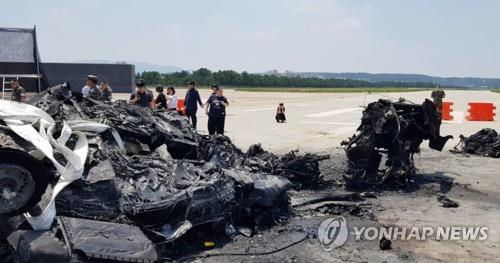