SEOUL, Sept. 17 (Yonhap) -- South Korean President Moon Jae-in said Monday that his trip to North Korea this week will focus on brokering a denuclearization deal between the U.S. and the North.

Moon's remarks came one day before he begins a three-day trip to Pyongyang for what would be his third bilateral summit with North Korean leader Kim Jong-un.

Moon and Kim met in the border village of Panmunjom on April 27, then again on May 26.

The president said he hoped to hold candid talks with the North Korean leader.

"I believe adding a new declaration or agreement between the South and the North is no longer important. What is important is to fundamentally develop inter-Korean relations while implementing inter-Korean agreements that have been signed so far," he said, according to Cheong Wa Dae pool reports. 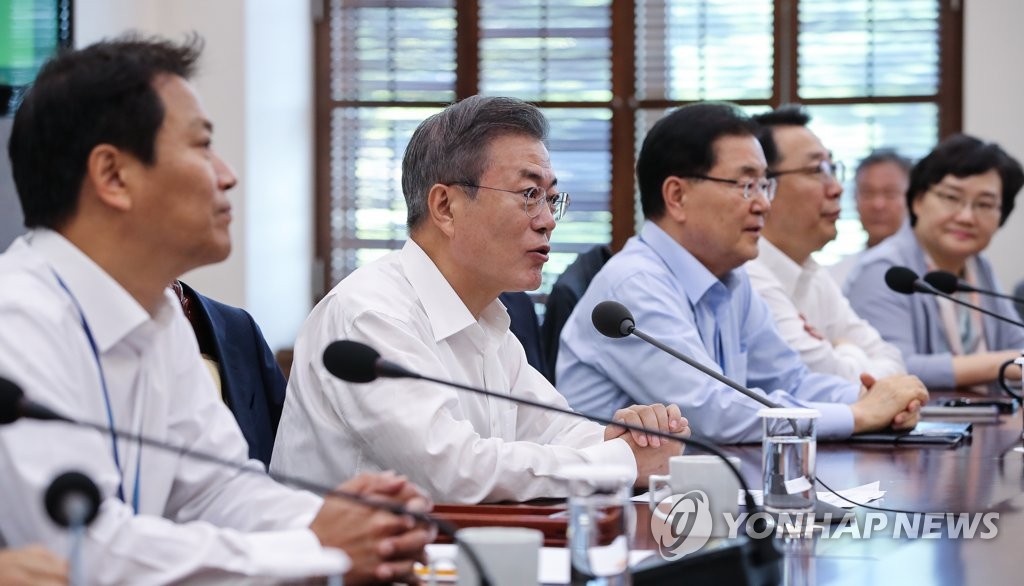 "What we need to this end is mutual trust. I have set holding as much discussion as possible with Chairman Kim Jong-un as the objective of the upcoming meeting," Moon added.

Still, the president stressed the need to further reduce military tension between the two Koreas.

"I will make special efforts on two issues at the upcoming summit to help establish lasting peace between the South and the North," he said.

"The first is to remove the tension and possibility of armed conflicts caused by the military confrontation between the South and the North, and to reduce fears of war. The second is to promote U.S.-North Korea talks aimed at denuclearization of the Korean Peninsula," the president said.

Moon's trip to Pyongyang comes amid a deadlock in denuclearization talks between the U.S. and North Korea.

The U.S. continues to insist on the need to maintain sanctions on the North until it completely denuclearizes.

North Korea, on the other hand, is calling for a quid pro quo, claiming the denuclearization steps it has taken already are irreversible and thus entitle the country to early rewards.

"Because this issue is not something we can address ourselves, I plan to hold candid talks with Chairman Kim Jong-un on where we can find an intersecting point between the United States' call for denuclearization steps and the North's demand for corresponding steps to guarantee its security and end the hostile relationship (between the U.S. and North Korea)," Moon said.

He also renewed his call for a second U.S.-North Korea summit.

"I believe the denuclearization issue can move forward at a rapid rate should the dialogue be resumed and the two leaders sit face to face with each other again," Moon told the meeting.