SEOUL, Sept. 19 (Yonhap) -- The Seoul Metropolitan Government said Wednesday it will ramp up efforts to turn the capital city into a plastic-free zone in line with the central government's recently-announced broader policy on waste management.

Under the plan, the city aims to reduce by half the usage of disposal plastic cups, umbrella covers and plastic bags at major public facilities by 2022.

The city will also oblige residential areas consisting of single houses to discard plastic waste separately from recyclables on a designated day of the week, it said.

The Seoul city government's announcement comes in step with the zero-plastic initiative rolled out by the Ministry of Environment early this month. The broader policy on waste management and resource recirculation centers on phasing out disposable plastic cups and straws at coffee shops and other public places by 2027 to better protect the environment.

Use of plastic cups and bags are already banned in Seoul City Hall and district ward offices and the city's affiliated bodies.

Seoul city plans to apply the same rule to its outsourcing entities and other private bodies by 2020.

Citizens will be prohibited from bringing any plastic cups into the Seoul City Hall building starting next year.

Public parks, strolling pathways along the Han River and other venues administered by the city will also scale back use of plastics. Any kiosks or convenience stores that want to open near these establishments will need to sign an agreement that includes a clause on restricted use of plastics.

The city will also work with officials from two main baseball stadiums in Seoul, in Gocheok in western Seoul and Jamsil in the east, to draw up measures to replace plastic tools used for cheering.

The city expects the recycling rate will rise to 70 percent through the implementation of the initiative. 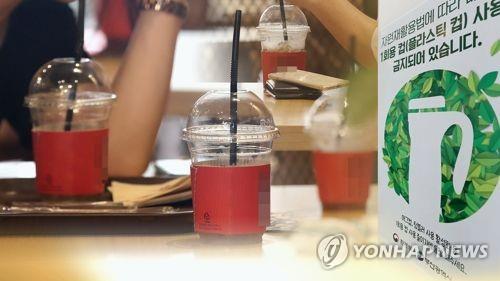