The average consumption propensity, or the ratio of total private and government spending to disposable income, stood at 78.9 percent, down 0.2 percentage point from the previous year and the lowest since 78.1 percent recorded in 2004, according to the data from the Bank of Korea.

The average consumption propensity, or a key measure of household spending, swung to a downtrend after coming to 81.6 percent in 2012.

Last year's number was the 2015 average of 92.5 percent for members of the Paris-based Organization for Economic Cooperation and Development, excluding South Korea. 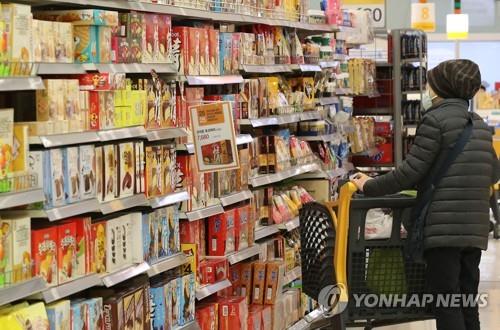 The 2017 drop was attributed mainly to chronically anemic household consumption, which accounts for more than 90 percent of private spending.

The drop in the average consumption propensity has sparked worries that consumer spending may lose further ground down the road, becoming a drag on Asia's fourth-largest economy.

"Consumption is weakening amid a consumer perception that income isn't growing faster than expected and economic conditions may become unstable," said Joo Won, a senior researcher at the Hyundai Research Institute. "The government should take measures to boost private employment and cut taxes to galvanize consumer spending."
(END)