The Korea Baseball Organization (KBO) said Tuesday Sun will hold a press conference at 3 p.m. Thursday at its Seoul headquarters to address the elephant in the room.

Even after guiding South Korea to its third straight Asian Games gold medal in Jakarta last month, Sun faced heat for selecting players that many thought were undeserving of national team spots.

Healthy South Korean men are required to serve about two years in the military, but athletes who win an Asian Games gold medal are exempt from conscription. Critics said the manager picked certain players just to help them get their military exemptions, since South Korea, as the only fully professional team at the Asian Games, was virtually guaranteed to win the gold medal. 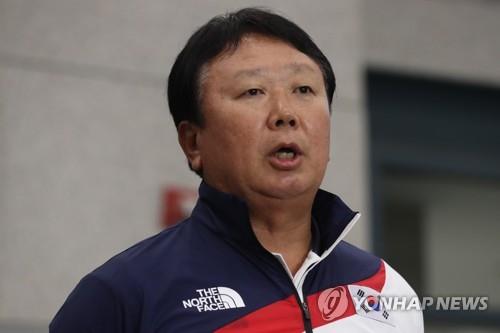 In particular, Oh Ji-hwan, shortstop for the KBO club LG Twins, became a lightning rod for criticism, as he was leading the league in errors and strikeouts at the start of the Asian Games.

Also fueling the public anger was South Korea's shocking 2-1 loss to a Chinese Taipei team of mostly amateurs in the first preliminary game. In the final, facing a Japanese team composed of amateurs, South Korea prevailed 3-0 in a decidedly uninspiring game.

Days after the gold medal victory, a civic group filed a report to the Anti-Corruption and Civil Rights Commission, the state anti-corruption watchdog, alleging that Sun violated the anti-graft law by picking underperforming players.

Also on Tuesday, the National Assembly's subcommittee on sports said it will bring in Sun as a witness during an annual parliamentary audit on Oct. 10. He's expected to be grilled about the Asian Games roster.

But he'll have a chance to clear the air six days prior to that.

Sun became the first full-time national team manager last summer and his term runs through the 2020 Tokyo Olympics, where baseball will make its return following a 12-year absence.