Park announced the initiative in Zug, Switzerland, which hosts about 250 blockchain-based venture firms, including the Ethereum Foundation, a leading cryptocurrency developer.

"There's no doubt blockchain is the core technology of the fourth industrial revolution, which will shape the future IT industry. I will make efforts to help Seoul become the center of a blockchain industry ecosystem," Park said.

He is on an 11-day trip to Spain, Switzerland and Estonia until Sunday.

The technology, largely applied to cryptocurrrency, uses a digital public ledger that can keep track of its transactions without a central server by continuing to add and distribute the records among shared parties. It is expected to revolutionize a wide range of industries from finance to logistics.

Park said the city government will spend 60.3 billion won by 2021 on building two business complexes in western and southeastern districts to house 200 blockchain-related companies. It will operate two training centers there, aiming to cultivate 730 experts in the field over the next five years.

The city also plans to create a 100 billion-won public-private fund to invest in blockchain startups by 2022. The city will inject 13.6 billion won into the planned fund.

It will also support blockchain-related conventions, tours and other promotional events. 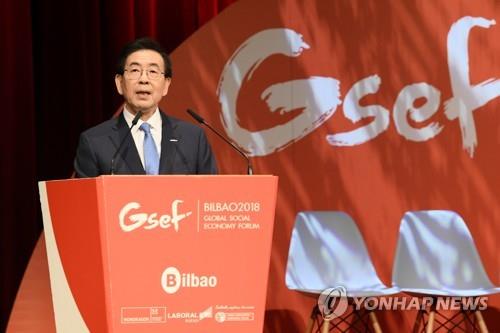