SEOUL/PYONGYANG, Oct. 5 (Joint Press Corps-Yonhap) -- South and North Korea held their first-ever joint event to celebrate the anniversary of a 2007 summit in Pyongyang on Friday amid a growing mood of rapprochement.

About 160 South Koreans, including government officials, politicians, civic, religious and cultural figures, took part in the event in the People's Palace of Culture in the North's capital to commemorate the 11th anniversary of the second inter-Korean summit on Oct. 4, 2007, which involved then-South Korean President Roh Moo-hyun and then-North Korean leader Kim Jong-il.

After the summit, the leaders signed the so-called Oct. 4 Declaration, promising to cooperate in building mutual trust, easing tensions and fostering inter-Korean economic cooperation. The agreement was not implemented amid ensuing security tensions between the two Koreas and a change of government in the South.

The celebration was part of the agreement between South Korean President Moon Jae-in and North Korea leader Kim Jong-un in September.

The participants in the Pyongyang event called for faithful implementation of the recent summit agreements by their leaders.

"The history of failures to fully carry out the June 15 and October 4 declarations should not be repeated," they said in a joint letter, referring to agreements reached in the first and second inter-Korean summit meetings in 2000 and 2007.

They also urged efforts to make the Korean Peninsula free of nuclear weapons and nuclear threats, while working together in expanding cross-border exchanges and cooperation. 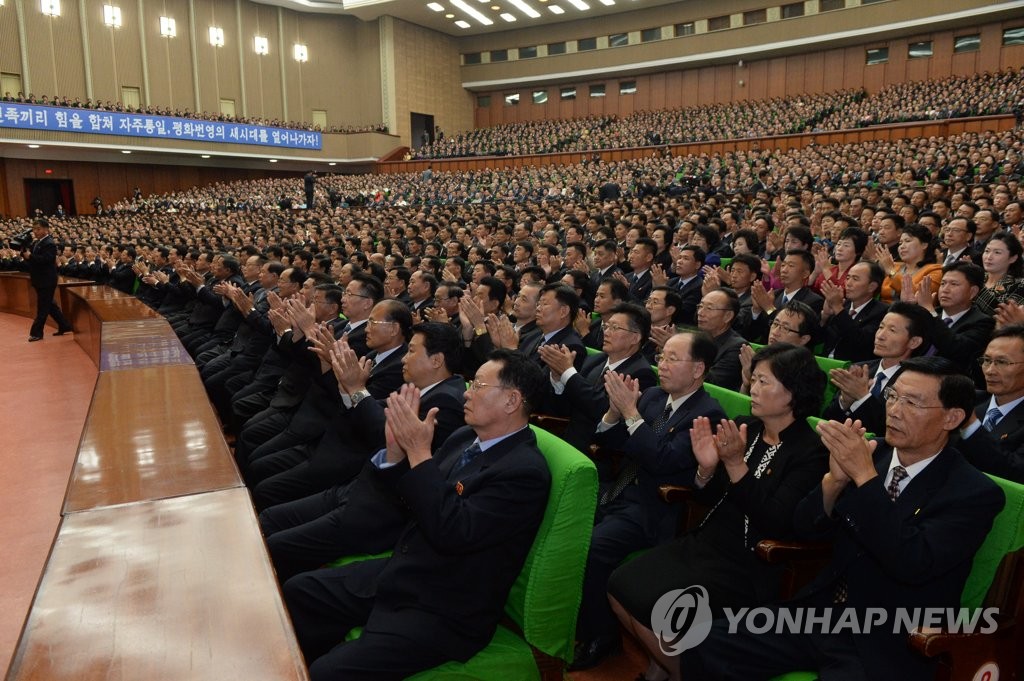 The event was joined by high-ranking North Korean officials including the North's nominal leader Kim Yong-nam and Ri Son-gwon, chairman of the Committee for the Peaceful Reunification of the Country.

In a speech, Kim called for all-out efforts to implement the summit deals reached this year between the two Koreas. Ri expressed hope for the resumption of a tour program to Mount Kumgang and the operation of an industrial complex in Kaesong, two major inter-Korean projects suspended years ago over chilled relations.

Cho also delivered a speech in which he called the Oct. 4 Declaration a "milestone that does not rust," saying that inter-Korean ties have been advancing further based on the summit deals reached in April and September this year.

"The South and the North will take one step at a time to make peace take a firm root in this land," he added. "Going beyond 70 years of division, the two will create a new future that no one has ever set foot in."

Later in the day, the South Korean delegation will attend a mass gymnastics performance, which a government official earlier said will be short on propaganda. Moon also watched the mass games during his visit last month.

On the sidelines, Cho, who is in charge of inter-Korean affairs, met with his North Korean counterparts to discuss follow-up measures to the Moon-Kim summit agreement.

The unification ministry earlier estimated South Korea may pay up to around 280 million won (US$250,000) to the North for the trip. The ministry said the payment is not a violation of international sanctions on the North and that the government has been discussing the matter with the United States.