JEJU ISLAND, South Korea, Oct. 10 (Yonhap) -- Five P-3 maritime patrol aircraft streaked through the sky above waters off the southern island of Jeju, followed by a mid-air showcase of South Korea's top-notch naval helicopters, such as its Lynx and AW-159 choppers.

Aboard the newest 4,900-ton landing ship named after Seongsan Ilchulbong, the island's scenic tuff cone, hundreds of local residents, naval personnel and reporters watched the demonstration segueing into a two-hour rehearsal of the International Fleet Review on Tuesday.

The once-in-a-decade event is set to occur Thursday, taking as its main theme "Jeju, Where Peace Starts," which dovetails with Seoul's ongoing efforts for denuclearization and a lasting peace regime on the divided peninsula.

South Korea first held the international event in 1998 to mark the 50th anniversary of its military's founding. 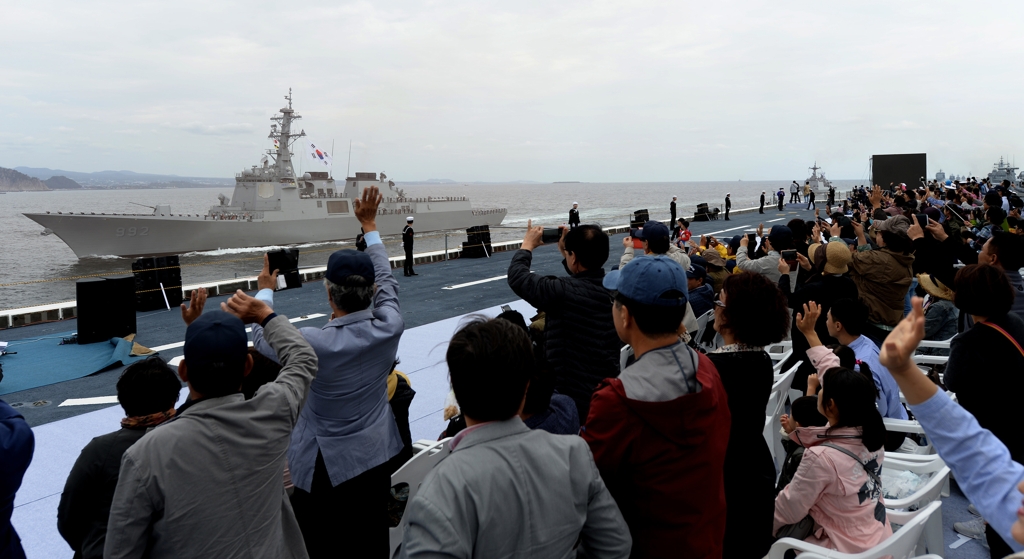 "We have decided to hold South Korea's third fleet review here on Jeju for the first time, as it is a venue of festivity where citizens and world navies can gather together in the hope of world peace and civilian-military harmony," Shin Jang-iy, rear admiral lower half in charge of the preparations for the event, told reporters.

"The Navy, the center of national maritime power, will endeavor to buttress efforts for lasting peace and prosperity on the peninsula," he added.

A total of 24 South Korean warships and 17 vessels from 12 foreign countries, including the United States and Russia, will join Thursday's fleet review.

Japan decided not to partake amid a row over its Maritime Self-Defense Forces' plan to hoist the controversial Rising Sun Flag on its vessel, which is castigated in Korea as a symbol of its imperialist past. China has also canceled its plan to send a 7,100-ton destroyer, citing "domestic reasons."

After the naval aircraft roared by overhead, a flotilla of South Korean warships moved past the Ilchulbong landing ship, which President Moon Jae-in and local and foreign dignitaries will board to carry out the review. 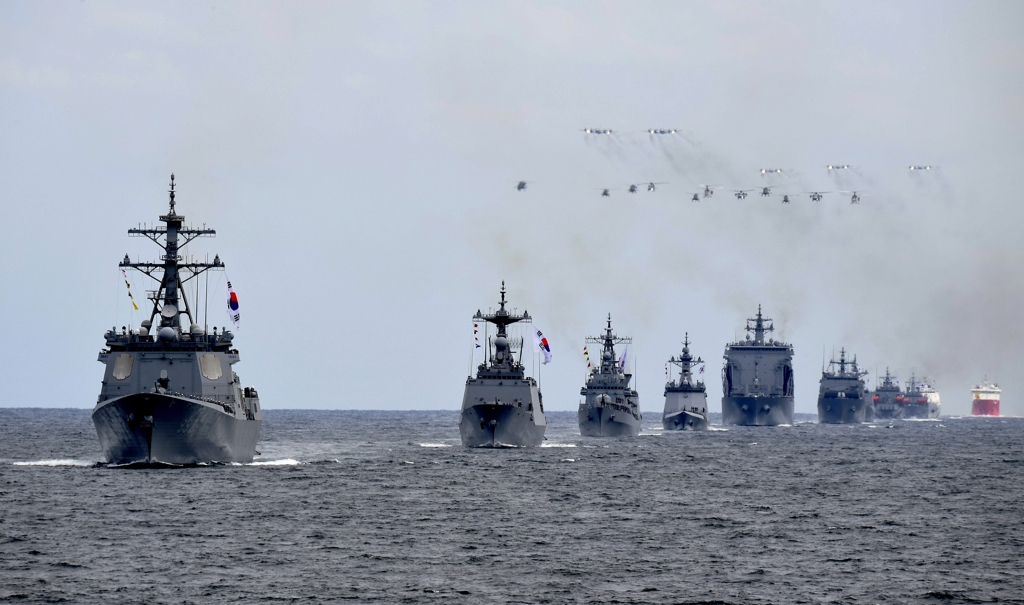 These ships, which are capable of longer-range operations far beyond the country's shores, were presented under the Navy's much-trumpeted slogan of "maritime power and ocean-going Navy."

Since the mid-1990s, the Navy started to use the blue-water slogan in a show of its desire to expand the scope of its operations beyond the peninsula to protect sea lines of communication and maritime peace in the region and beyond.

But with Pyongyang's repeated attacks, such as its sinking of the corvette Cheonan in March 2010, the Navy was forced to look inward for some time to avoid criticism that it is neglecting its coastal defense against the North.

However, ongoing efforts for inter-Korean rapprochement and potential maritime threats from surrounding powers such as China and Japan have highlighted the need for the Navy to refocus on its blue-water capabilities.

Maritime tensions have continued as South Korea has yet to conclude its negotiations with China over their overlapping exclusive economic zones, while Japan persistently claims sovereignty over South Korea's easternmost islets of Dokdo.

China has a long-term maritime strategy that covers not only the South and East China seas, but also a large section of the Pacific. Japan has also pushed to make its maritime strategy more active to cover a broader range of operations, apparently to keep China in check and expand its maritime interests.

"A blue-water Navy ... is a goal that we cannot attain right away. But yes, we are dreaming again of achieving that goal," a senior Navy official told Yonhap News Agency during the fleet review rehearsal on condition of anonymity.

"We need to protect our seas and our nationals operating across the world. ... In the past, we have relied on the power of our ally, the U.S. But now, we have to secure our own capabilities to safeguard our maritime interests on our own," he added.

On the day of the fleet review, the 14,500-ton amphibious landing ship Dokdo and the 4,900-ton landing ship Cheonjabong will be deployed to carry citizens for the event designed in part to get a better understanding of naval assets built with taxpayers' money.

Foreign warships did not participate in the rehearsal, as many of them have not yet arrived at the Jeju civilian-military complex port. Instead, Navy commandos and Air Force fighters, such as F-15Ks and KF-16s, staged performances to celebrate the naval event.

The vessels will appear in alphabetical order of their countries, although the 103,600-ton nuclear-powered aircraft carrier USS Ronald Reagan will appear toward the end of the review due to its massive size. 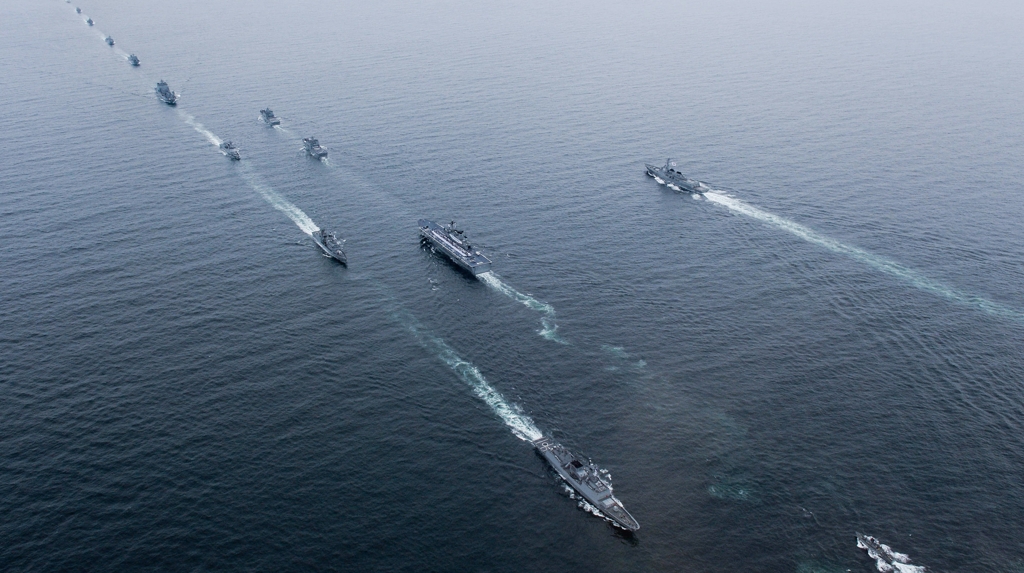