The Ministry of Trade, Industry and Energy said it will set the legal framework for a "regulatory sandbox" to allow testing of new technologies within the first half of next year.

A regulatory sandbox is a concept that allows small-scale, live testing of innovations by private firms in a controlled environment under the regulator's supervision. It is aimed at addressing frictions with the regulator's desire to encourage and enable innovation.

The ministry said it will first ease regulations for delivery robots, autonomous ships and roads made of solar panels to allow developers to test the new platforms with less supervision.

It also vowed to step up investment in research and development and to train professionals in the promising technology fields.

"We will foster promising sectors and launch pilot projects to facilitate innovation and create quality jobs," Industry Minister Sung Yun-mo said during a parliamentary audit held at the National Assembly. "We will also ease regulations and expand R&D support to boost the future industries." 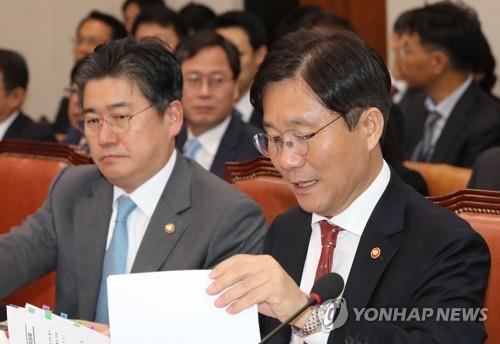 To tackle the sluggish manufacturing sector, the policymaker said the government will expand support for rejuvenating the auto and shipbuilding sectors to upgrade their global competitiveness.

The ministry said it will continue to push for its energy transformation policy to shift the focus from coal and nuclear power to renewable sources.

Under the goal, the ministry vowed to expand investment in innovative energy technologies to make them new growth drivers for Asia's fourth-largest economy.

The government's energy roadmap aims to raise the ratio of renewable energy to 20 percent by 2030 and to gradually phase out nuclear power.

Currently, South Korea operates 24 nuclear reactors that generate about 30 percent of its electricity. Under the nuclear phase-out plan, the nation's 10 oldest reactors will be retired by 2030 as their operational life cycles expire.