According to the Korean Central News Agency (KCNA), Kim gave a field guidance to the orchestra theater ahead of its new opening on Wednesday and praised it for being "graceful and delicate, yet gorgeous and magnificent" in architectural form and content and also combining modern and classical aesthetics. 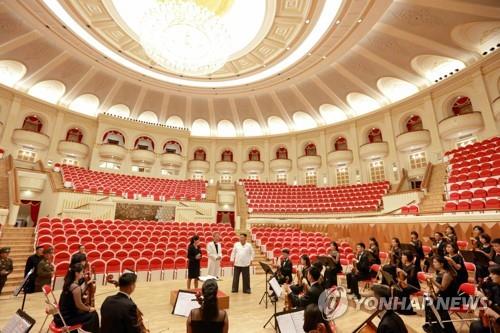 The KCNA said in an English dispatch from Pyongyang, "The theater that has taken up a fresh look on the bank of the River Pothong is a grand center of culture and arts and a monumental edifice of an ideological and art power."

With a total floor space of 36,610 square meters, the theater consists of a circular, 1,200-seat, amplification-free hall, as well as dubbing rooms, creation rooms, practice rooms and make-up rooms, the agency noted.

It said Kim presented a new vision for the theater in January and has since visited the construction site eight times.

The Samjiyon Orchestra is well known for its performances in South Korea ahead of the opening of the PyeongChang Winter Olympics in February this year, as well as in front of South Korean President Moon Jae-in and his attendants on a visit to Pyongyang last month.

Kim was quoted by the KCNA as saying during his field guidance that in the past he used to think a lot about the old, worn-out building whenever he used to pass it, but now he feels like a load has been taken off his mind.

He reportedly gifted a grand piano to the Samjiyon Orchestra Theater.