(ATTN: UPDATES with reports of remarks from both leaders in a state dinner in paras 12-15)
By Byun Duk-kun

The call came in a bilateral summit with French President Emmanuel Macron where the South Korean leader asked France, a permanent member of the U.N. Security Council, to spearhead the move when conditions are met.

In a joint press conference following their summit, Macron emphasized the need to maintain international sanctions on the North to completely, verifiably and irreversibly denuclearize the communist state.

He, however, said his country will support ways to further accelerate the denuclearization process if the North is in fact moving in that direction. 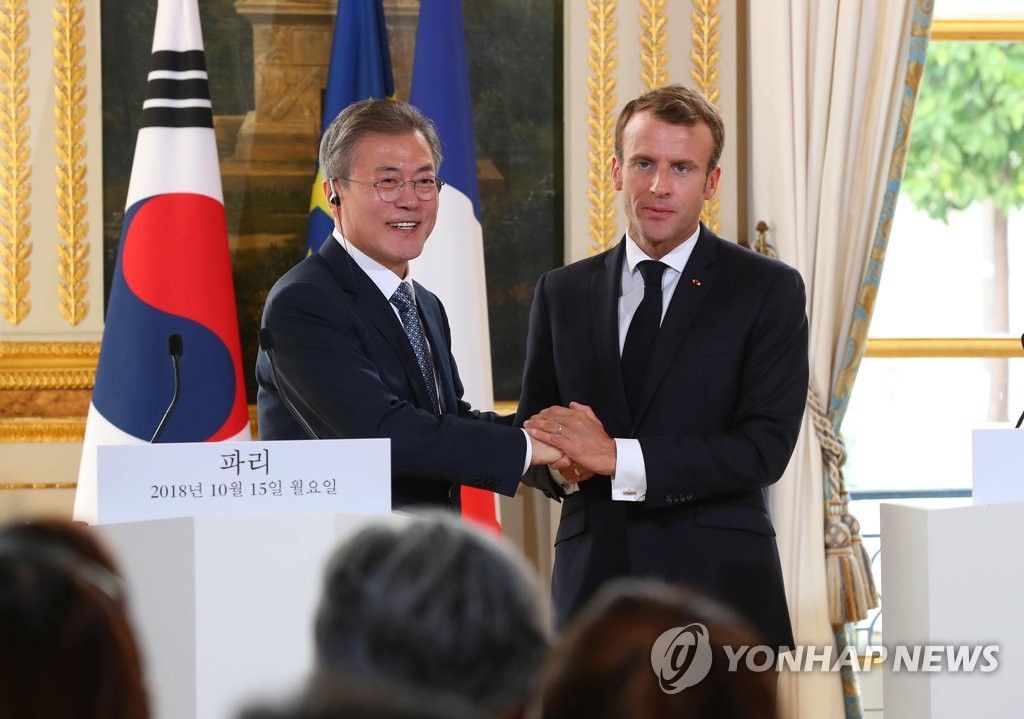 Moon agreed with the need to maintain pressure on the North until it denuclearizes, but said such pressure could or should be eased to encourage the impoverished North.

"I believe the international community needs to provide assurances that North Korea has made the right choice to denuclearize and encourage North Korea to speed up the process," the South Korean president told the joint press conference.

Moon's remarks come amid an apparent tug of war between the United States and North Korea over when the North should be entitled to rewards for giving up its nuclear ambitions.

Pyongyang is said to be demanding timely rewards for what it claims to be irreversible denuclearization steps it has already taken while Washington is insisting on maximum sanctions and pressure until the impoverished nation fully denuclearizes.

In his third bilateral summit with Moon, held in Pyongyang last month, North Korean leader Kim Jong-un offered to take additional denuclearization steps, including the dismantlement of the country's only nuclear test site, in the presence of international experts for verification.

"Chairman Kim Jong-un has said he is willing to not only halt the country's nuclear and missile tests and also dismantle its production facilities, but also dismantle all nuclear weapons and nuclear materials it currently possesses if the United States takes corresponding measures," the South Korean president told Macron in their meeting, according to Moon's chief press secretary, Yoon Young-chan.

In a state dinner held later at the Elysee Palace for Moon and his wife, Kim Jung-sook, Macron said France will stand by Moon in his efforts to denuclearize North Korea.

"We are ready to fulfill every mission given to us as a permanent member of the U.N. Security Council to realize complete, verifiable and irreversible denuclearization of North Korea," he said.

"France will support the president to this end," added Macron.

Moon said the road to peace will not be easy but that his country will succeed with the support of France, contributing to peace in the entire Northeast Asian region.

Moon arrived here Saturday on a four-day state visit that will end Tuesday. The Moon-Macron summit followed an official welcome ceremony for Moon.

The leaders of South Korea and France also discussed ways to improve the countries' bilateral relationship.

"The two leaders agreed to expand the countries' bilateral trade and investment based on the countries' comprehensive partnership for the 21st century established in 2004, and to take joint efforts to develop new growth engines in the fourth industrial revolution by expanding their cooperation in areas, including the science technology, new industry, SMEs and startup sectors," Moon's presidential office, Cheong Wa Dae, said in a press release. 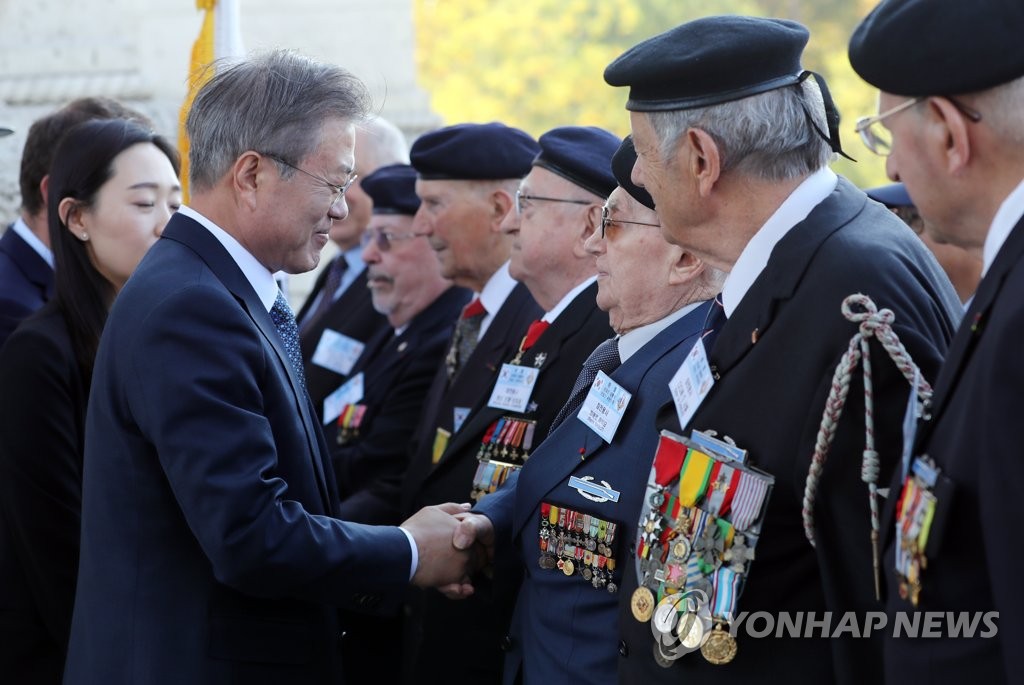 In a joint declaration, the two leaders said they have agreed to annually hold a high-level dialogue between their foreign ministry officials, along with economic cooperation talks.

The Moon-Macron summit marked the second of its kind since both leaders took office in May 2017.

The South Korean president invited Macron to make a state visit to South Korea next year. The French president accepted the invitation, according to Moon.

The South Korean president will leave Paris on Tuesday for Italy, where he will make official visits to Rome and the Vatican.

He is currently on a five-nation tour that will later take him to Belgium for the Asia-Europe Meeting (ASEM) summit that will involve the heads of state or government from 50 other countries.