Moon Chung-in, a special presidential adviser for unification, diplomacy and national security affairs, made the remark in an interview with the JoongAng Monthly Magazine, saying that South Korea-U.S. relations should be viewed from the perspective of a sovereign state interacting with another sovereign state.

Moon's comment came after U.S. President Donald Trump said last week that South Korea would not lift sanctions on Pyongyang without U.S. approval, after Seoul's foreign minister suggested earlier that her government was reviewing the so-called May 24 Measures imposed in 2010 in response to the North's sinking of a South Korean warship. 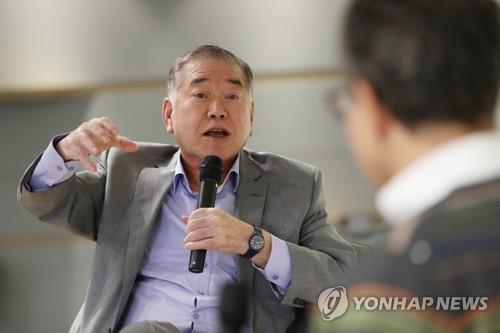 The script of Moon's interview was released on Thursday.

"(South Korea) is an independent, sovereign state. How can the U.S. president say so? Why do we have to just follow the U.S.? If so, are we a sovereign state?" Moon said.

He then speculated that Trump, who often speaks impulsively, may have used the word approval while trying to emphasize the word consultation.

"The two Koreas have held private sector exchanges and reunions of separated families that are not in violation of the U.N. Security Council sanctions. If we're bound by the May 24 Measures, all inter-Korean exchanges and cooperation will come to an end," said Moon.

The adviser said Pyongyang and Washington should make efforts to build mutual trust as they seem to have different positions on the declaration of North Korea's nuclear program, for instance.

"North Koreans reportedly say they have 20 to 30 nuclear warheads, whereas the U.S. intelligence authorities estimated the number at 60 to 65. Even if the North declares 20 warheads, the U.S. will still harbor doubts. Then the negotiations will fall through," Moon said.

One of the ways to enhance mutual trust between North Korea and the U.S. is a declaration to formally end the 1950-53 Korean War, he added.