SEOUL, Oct. 21 (Yonhap) -- South and North Korea are likely to start their joint on-site inspection as early as this week for a project to modernize and re-link railways across their border, government officials said Sunday.

At high-level talks last week, the two Koreas agreed to begin field surveys of the western Gyeongui railway in late October and the Donghae railway along their east coast in November.

"The Koreas are known to be discussing ways to conduct the inspection (on the North section) of the Gyeongui line starting late this week," a government official said.

"The schedule is flexible, depending on consultations between the government and the United Nations Command (UNC) over the passage of the Military Demarcation Line," he added. 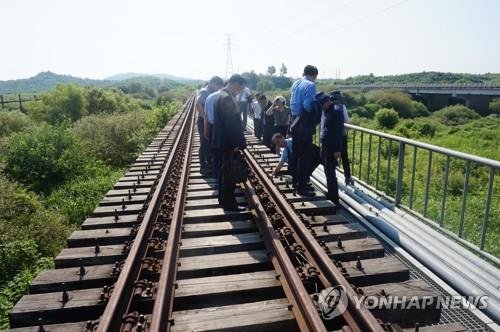 In August, the Koreas failed to carry out a joint railway field survey as the U.S.-led UNC did not approve the plan, citing "procedural" problems, a move widely seen as U.S. objection to the inter-Korean railway project on the basis that it might hamper sanctions.

"As far as I'm concerned, Seoul's consultations with Pyongyang as well as the UNC are smoothly under way," the official said.

If launched, the joint inspection will involve the test operation of a train on the railway linking Seoul to the North's northwestern city of Sinuiju.

After that, the Koreas will check the eastern railway on the North's side that connects Mout Kumgang to its northeastern North Hamgyong province.

South and North Korea are looking to hold a ground-breaking ceremony for work on the rail and road systems along the eastern and western regions either in late November or early December.

On Monday, they will hold talks at a joint liaison office in the North's border town of Kaesong to discuss ways to promote forestry cooperation and to control pine tree pests.

His North Korean counterpart is Kim Song-jun, a senior official at the North's ministry of environmental protection.

In October, the Koreas are also scheduled to have health-related talks on curbing the spread of contagious diseases and sports talks to discuss co-hosting of the 2032 Summer Olympics.