WASHINGTON, Oct. 29 (Yonhap) -- Five decades after its launch, the Security Consultative Meeting (SCM) serves as an overarching defense dialogue between South Korea and the United States to fend off North Korea's military adventurism and maintain peace and stability on the peninsula.

On Wednesday, the allies will mark the 50th anniversary of their annual defense chiefs' talks in Washington D.C. against the backdrop of diplomacy with the communist regime aimed at building trust and encouraging its nuclear disarmament.

"Over the past 50 years, the SCM has played a central role in maintaining peace and stability on the Korean Peninsula while reinforcing the ironclad ROK-U.S. alliance," a joint commemorative statement reads, calling the SCM "irreplaceable." ROK stands for South Korea's official name, the Republic of Korea.

The SCM is the allies' core institution for defense cooperation, along with the Military Committee Meeting (MCM), which is an annual dialogue between their top active-duty officers, and the Combined Forces Command (CFC), a combat-ready unit of their troops in South Korea.

The SCM involves the two sides' defense chiefs, chairmen of their Joint Chiefs of Staffs and senior diplomats discussing a range of bilateral and regional issues, including their evaluations of security threats in Korea and the region as well as cooperation in the arms industry.

Held alternately in their respective capitals every year, the South and the U.S. have used the SCM to make pivotal decisions on key issues such as the establishment of the CFC and MCM, the transfer of wartime operational control and the relocation of U.S. bases in Korea.

The MCM is held before the SCM and the allies' top uniformed officers use it to analyze the overall security situation on the peninsula and discuss ways to maintain a robust combined defense posture. The MCM reports to the SCM.

The SCM originated in 1968 as the "Annual ROK-U.S. Defense Official Meeting." At its fourth meeting in 1971, it was renamed the SCM with the participation of diplomatic officials.

The creation of the SCM came as both allies shared an urgent need for an efficient coordination apparatus in the wake of Pyongyang's surprise attempt to infiltrate Seoul's presidential office Cheong Wa Dae and its seizure of a U.S. intelligence ship, USS Pueblo.

Historians said the North's provocative acts led to discord among the allies. Washington sought to address the issue with Pyongyang directly, causing consternation among South Koreans who viewed its ally as paying little attention to the North's attacks on their country.

In an apparent bid to tamp down tensions in the alliance, Washington pledged to offer military assistance to Seoul, while the allies agreed to hold their defense chiefs' talks annually for closer coordination.

As the allies seek to broaden their security cooperation, the SCM is expected to continue as a central meeting to deal with various emerging military challenges, while still maintaining its focus on Pyongyang's denuclearization. 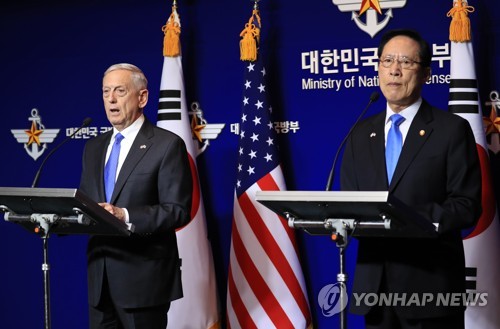