SEOUL, Nov. 2 (Yonhap) -- South and North Korea held a meeting of liaison office chiefs Friday amid worries over a delay in some of their agreed-upon joint projects, the unification ministry said.

Vice Unification Minister Chun Hae-sung and his North Korean counterpart, Jon Jong-su, met at the liaison office in the North's border town of Kaesong at 10 a.m. for about an hour, according to the ministry.

"Both had a comprehensive discussion on various pending issues recently raised by the Koreas and reaffirmed that they will make unswerving efforts to advance inter-Korean relations, including the enforcement of the Pyongyang Declaration in September," the ministry said in a text message sent to reporters later in the day. 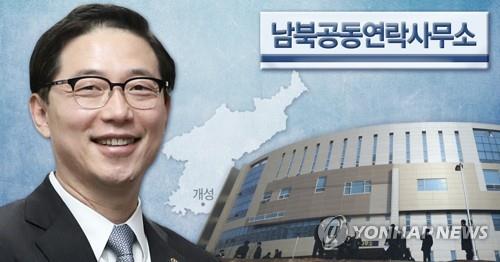 The meeting between the co-heads of the office drew attention as it came amid worries caused by a delay in some of the previously agreed-upon cross-border projects.

The countries had pushed to hold a North Korean art troupe's performance in Seoul in October and conduct joint on-site railway inspections in the North late last month. Neither of them have yet to be carried out, with no word on when they will take place.

The liaison office meeting marked the first of its kind since the co-heads last met Sept. 28. When the office was launched in mid-September, they agreed to meet every week.

The Koreas opened the office in a follow-up move to their leaders' summit agreement aiming to facilitate cross-border exchanges and cooperation through a round-the-clock communication channel.

Meanwhile, Lee Eugene, deputy spokeswoman of the ministry, earlier told reporters that the ministry could join a working group that South Korea and the United States recently agreed to launch in order to deepen coordination in their approach to North Korea.

The working group is expected to be led mostly by Seoul's foreign ministry and Washington's State Department, but other agencies are said to be able to join it.

"If necessary in the process of consultations, the unification ministry and other relevant agencies could participate (in the working group)," she said. "Things will likely shape up after we have some progress in discussions among government ministries and agencies."