SEOUL, Nov. 4 (Yonhap) -- The SK Wyverns defeated the Doosan Bears 7-3 on the road to open the Korean Series on Sunday, flexing their muscles with two home runs.

Former Korean Series MVP Park Jung-kwon blasted a go-ahead two-run shot in the sixth inning at Jamsil Stadium in Seoul, after Han Dong-min opened the scoring with a two-run homer in the first. The Wyverns' pitching survived after issuing nine free passes.

The team that won the first game has gone on to win 25 out of 34 Korean Series so far.

The Wyverns led the regular season with 233 home runs in 144 games. And in their five-game victory over the Nexen Heroes in the previous playoff series, they launched 13 long balls, scoring 21 of 30 runs via home run. 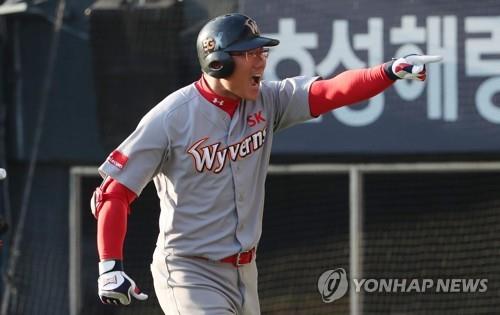 The Bears advanced directly to the Korean Series, after posting the league's best regular season record. This was their first game since their regular season finale on Oct. 14.

The Wyverns, which finished a distant second to the Bears in the regular season, had to play an extra playoff series against the Heroes, a tough five-game battle that ended last Friday.

The No. 1 seed from the regular season has taken 15 of the past 16 Korean Series, the only exception being the 2015 Bears.

For the Bears in Game 1, designated hitter Choi Joo-hwan drove in all three runs in the losing cause. They loaded the bases three times, including with nobody out in the seventh, but managed just two runs -- both on Choi's single in the fifth -- from those opportunities.

Trey Hillman, the winning manager, said he was pleased with stealing the first game on the road but the series is far from over.

"I think it's always really nice in any series to get Game 1, but you have to balance that with having the respect that you should have for who you're playing," Hillman said. "We won Game 1 against Nexen also and (the series) went down to the last game. I hope we play well tomorrow. I like where we're at offensively. I was really pleased with our swing decisions (in Game 1)."

Han, who won the previous playoff series with a walk-off, 10th-inning solo shot in last Friday, homered in his first at-bat in the first inning in this game. At 1-0 count against starter Josh Lindblom, Han drove a cutter that was down and in -- right in his wheelhouse -- into the right field seats.

That gave Han a home run in two consecutive at-bats and three postseason games in a row, dating back to Game 4 of the previous series last Wednesday.

SK starter Park Jong-hoon walked the bases loaded with two outs in the second, but got out of jam by getting Heo Kyoung-min to line out to right field. 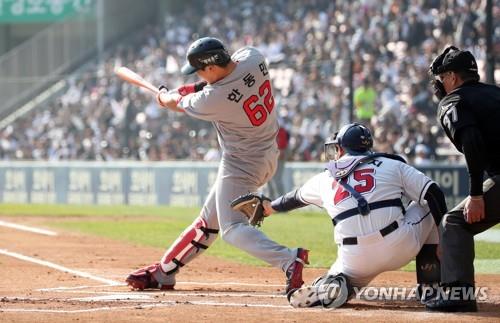 Park failed to escape another jam in the third inning, when his control abandoned him again.

After giving up a leadoff single, Park got two quick outs but then walked Yang Eui-ji. With runners at the corners, Choi Joo-hwan -- who had a career-high 108 RBIs in the regular season -- lined a single to right field to cut the deficit to 2-1.

The Bears had another bases-loaded opportunity in the fifth. Park gave up a leadoff single to Jung Soo-bin, and was pulled after getting a groundout. But new pitcher Kim Taek-hyeong walked the next two batters to load the bases, and handed things over to Angel Sanchez.

Choi Joo-hwan stepped up and pounced on the first-pitch fastball from Sanchez, lining it to right field and bringing in home two runners for a 3-2 Doosan lead.

But that advantage didn't last long. With a man aboard in the top sixth, Park Jung-kwon sent a line drive shot to the right field seats for a go-ahead two-run homer, putting the Wyverns on top by 4-3.

This was the second home run this postseason for Park, a 37-year-old who spent much of the regular season in the minors.

Park entered Sunday with 28 Korean Series games under his belt -- second most on either club. He was the MVP in the 2010 Korean Series -- the last time the Wyverns won a championships -- when he batted .357 in a four-game sweep over the Samsung Lions.

The Wyverns had the bases loaded for Park in the seventh inning, but he didn't have to swing the bat for his club to add a run. Jang Won-jun, the Bears' third pitcher of the inning, threw a wild pitch and Park Seung-wook scored easily from third to make it 5-3 Wyverns.

The Bears loaded the bases with nobody out in the seventh, thanks to a pair of singles and a walk against new pitcher Kim Tae-hoon. 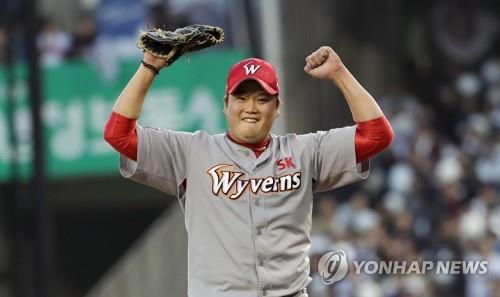 But the inning played out to the worst-case scenario for the Bears. With Kim still on the mound, Oh Jae-il struck out swinging and Kim Jae-ho grounded into the rally-killing, 4-6-3 double play.

The Wyverns gave themselves more breathing room with two more runs in the top of the ninth.

With runners at the corners, first baseman Oh Jae-il fielded a high chopper but made a wild throw to second base, allowing Kang Seung-ho to trot home for a 6-3 lead.

Park Jung-kwon then got his third RBI of the game with a sacrifice fly to center field.

The Bears had the meat of their order coming up in the bottom ninth, but right-hander Jung Young-il slammed the door shot with a strikeout, groundout and a flyout.

Doosan's No. 3 hitter Park Kun-woo went 0-for-5 with three strikeouts.

"The key thing today was we managed our free passes," Hillman said. "Our bullpen executed pitches when they had to and got themselves out of some jams."