SEOUL, Nov. 5 (Yonhap) -- The Koreas began a joint survey of a waterway along their western border Monday to jointly use the estuaries of the Han and Imjin rivers where civilian access has been restricted due to military tensions, Seoul's defense ministry said.

Under the September inter-Korean military accord, they will conduct it until the end of the year to militarily guarantee the safety of the estuaries so that they can be used for tourism, ecological protection and the collection of construction aggregate.

"The joint survey of the Han River estuary is a measure taken for the first time since the Armistice Agreement was signed in 1953," the ministry said in a press release.

"Due to the absence of a military demarcation line in the estuary, there has been a high chance of accidental clashes there. But through this measure, it will be transformed into a site of peace," the ministry added.

The 20-member survey team consists of 10 people from each side, including military and maritime government officials and waterway experts. The team members carry no weapons and are banned from doing any provocative acts during the joint survey.

The South deployed six ships for the joint survey that uses an acoustic program to measure the depth of water for information on the safe navigation through the waterway. After the survey is complete, the authorities will provide civilians with a navigation map.

The 70-kilometer-long waterway that the Koreas agreed to jointly use spans around 280 square kilometers.

Under the inter-Korean accord, people and ships that want to use the areas must notify the military authorities a day before their entry. Between April and September, people will be allowed to use the estuaries from 7 a.m. to 7 p.m., while they will remain open from 8 a.m. to 6 p.m. between October and March.

During the 2007 inter-Korean summit, Seoul and Pyongyang agreed on a set of projects through the joint use of the river estuaries. But they did not materialize due to strains in cross-border relations.

The joint survey is another step by the Koreas to enforce their military agreement signed by their defense ministers after the third inter-Korean summit between President Moon Jae-in and North Korean leader Kim Jong-un in Pyongyang in September.

Aimed at reducing tensions and preventing accidental clashes, the agreement includes various trust-building measures and conventional arms control plans, such as disarming the Joint Security Area in the Demilitarized Zone and removing some border guard posts on a trial basis. 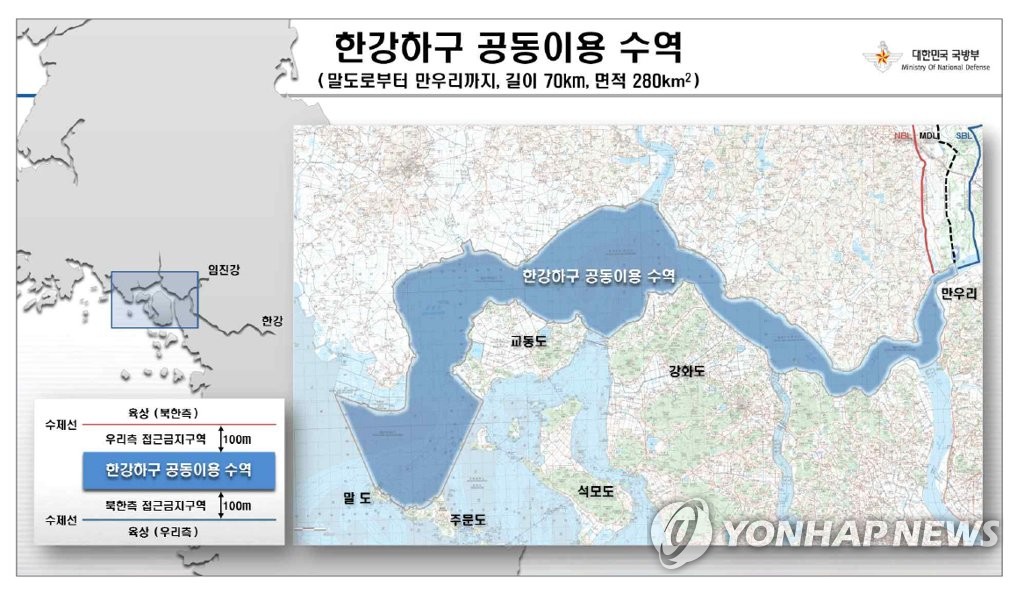