PYEONGTAEK, South Korea, Nov. 8 (Yonhap) -- Army Gen. Robert B. Abrams took office as the new commander of U.S. Forces Korea (USFK) on Thursday, amid diplomatic efforts by Seoul and Washington to build a lasting peace on the divided peninsula.

"I am deeply honored to have this opportunity to lead this one-of-a-kind triple-headed command, a unique joint combined force that draws its strength from the ironclad relationship with the Republic of Korea and the commitment of the United Nations," the new commander said.

"The U.N. Command, the Combined Forces Command (CFC) and USFK are critically important for our shared interests in the defense of the Korean Peninsula and the security of the region. ... All three are bound by the deep, enduring relationships, commitment to each other, which is critical to the success of their missions," he added. 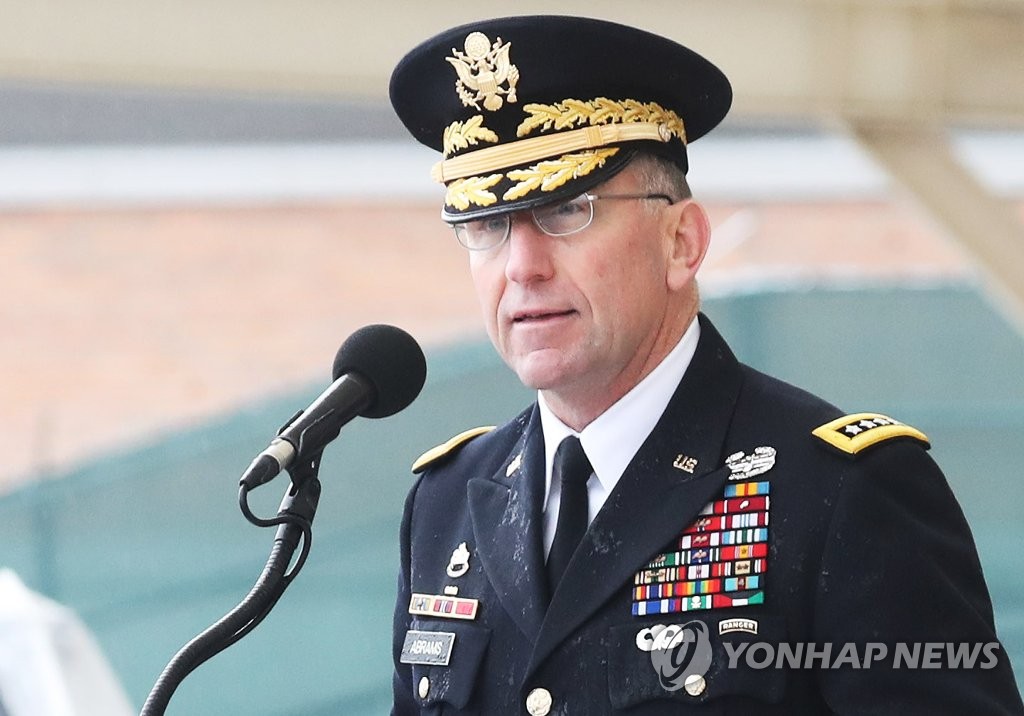 The former chief of the U.S. Army Forces Command replaced Gen. Vincent Brooks who had led the USFK, the U.N. Command and the CFC, all headquartered in South Korea, since April 2016.

During his speech, Brooks expressed his appreciation to all staff who worked under his leadership.

"A commander is nothing without someone to carry out the commands. Everything that happened over the last 30 months happened because of what they did collectively," he said.

Recalling his tour of duty in Korea, he stressed that he learned the "importance of human interaction and the contagious nature of attitudes."

"There is much we can accomplish ... when we communicate freely, openly and trustingly. We built a credible readiness to fight. We demonstrated self-restraint and responsive agility and thus did not have to fight in order to win," he said.

"We grew stronger under the tests and strains that confronted us contrary to the predictions of cracks. Let this be a lesson to all in the alliance. In this place, we have never succeed by going alone. And in contrast, we have always succeeded when we went together, crossing the river in the same boat." he added. 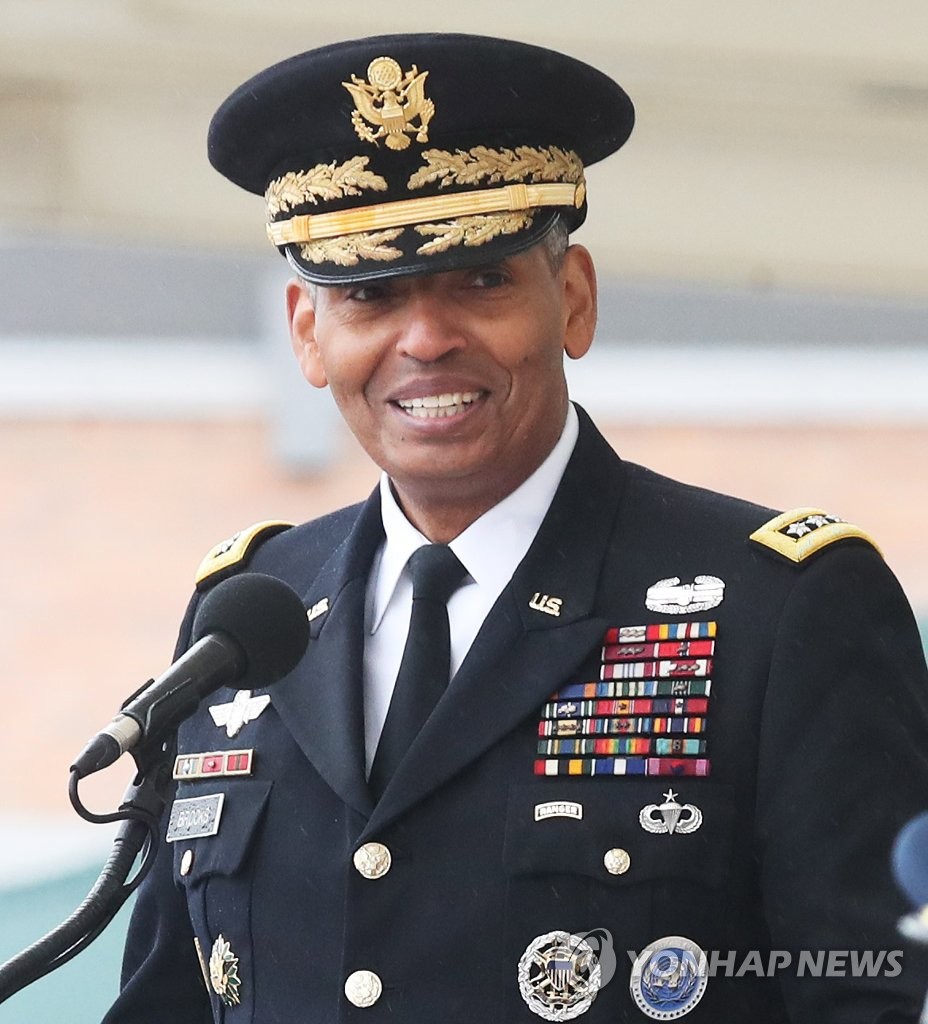 In a message to Abrams, President Moon Jae-in called for his close cooperation in handling the allies' pending issues, including the planned transfer of wartime operational control (OPCON).

"I believe that with Commander Gen. Abrams at the center, we will keep a more solid combined defense posture," he wrote in the message.

Defense Minister Jeong voiced hopes that under Abrams' leadership, the allies can work toward a "new era of peace and prosperity."

"The obligation bestowed upon us, which carries implications for world history, is to prop up with strength the efforts for denuclearization on the peninsula and the establishment of peace," he said.

Abrams is expected to face a series of daunting tasks, including coordinating with South Korean forces over the OPCON transfer and exploring ways to maintain a robust readiness posture amid peace efforts with Pyongyang.

Observers said he may also play a role in mapping out a new vision of the South Korea-U.S. alliance, as it seeks to broaden its security role that has hitherto focused on countering North Korea's nuclear and missile threats.

The new commander earned his commission from the U.S. Military Academy in 1982. He has commanded various units in combat operations, including in Saudi Arabia, Kuwait, Iraq and Afghanistan.

Most recently, he served as the chief of the U.S. Army Forces Command from August 2015 until October this year. At the Army's largest organization, he led 229,000 active-duty soldiers.

Also on Thursday, Walter A. Tagalicud was sworn in as the new command sergeant major, replacing Steven L. Payton.

During his tenure here, Brooks had one of the most turbulent periods in the alliance, marked by a series of the North's military provocations, such as nuclear and missile tests, not to mention menacing verbal threats.

In his recent contribution to a periodical of South Korea's Joint Chiefs of Staff, Brooks said, "We are at a very different place today than when I first arrived," while noting that there were 53 separate North Korean provocations within his first 19 months of command in Korea.

"After years of tensions, the prospects for peace through a final resolution to hostilities combined with denuclearizing are very real," he wrote. "South Korea and the United States are at a historic juncture in our relationship as allies and in the relationships we build with North Korea."