SEOUL, Nov. 8 (Yonhap) -- South Korea will make preparations to hold a groundbreaking ceremony for the connection and the modernization of inter-Korean railways, as agreed earlier by the Koreas, regardless of the recent postponement of high-level talks between North Korea and the United States, a Seoul government official said Thursday.

A ranking official at the Ministry of Unification said that South Korea is preparing to proceed in accordance with an inter-Korean agreement to connect and modernize cross-border railway lines, when asked by reporters if the planned groundbreaking ceremony would be possible by year's end following the delay of the North-U.S. talks. 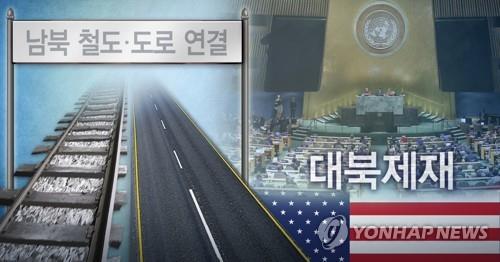 In a separate question on whether the Koreas' plan for a joint survey of cross-border railways would be affected by the delay, the official said, "North Korea and the U.S. are still fine-tuning the schedule for high-level talks. The two processes cannot be considered totally unrelated but are not necessarily interlinked with each other.

"We'll continue to make preparations through consultations with the U.S. and other means to ensure that cooperation projects agreed between the two Koreas proceed smoothly," the official said.

During a summit in Pyongyang in September, South and North Korea agreed to hold a ceremony within this year marking the launch of inter-Korean railway connection and modernization.

Asked to comment on the ongoing preparations for the groundbreaking ceremony, the official said that they include consultations between the relevant ministries and cooperation with the international society.

"Some of the inter-Korean agreements have been a little delayed, while others have been proceeding normally. Don't attach any special meaning to what I said," the official said. "I'm just speaking comprehensively about those proceedings."

"The inter-Korean railway cooperation has been approached from the existing railroads due to the need to take advantage of the existing railbed," Cho said during a session of the National Assembly Foreign Affairs and Unification Committee.

"The two Koreas have yet to discuss the number of lanes and the speed of trains in the cooperation project."