Defense Minister Jeong Kyeong-doo told lawmakers that it's part of the accomplishments under the inter-Korean Comprehensive Military Agreement (CMA) signed in September.

The CMA, a key element in their latest summit deal, calls for the two sides to take a set of confidence-building measures, including the pullout of front-line troops and firearms.

The two sides completed a joint work to get rid of land mines from Panmunjom's Joint Security Area (JSA) on Oct. 20 in order to disarm it.

"There were no land mines found in our region, and the North informed us that it has removed more than 600 land mines," Jeong said at a National Assembly session.

Asked to specify the number, he said 636.

With regard to concrete-made guard posts inside the Demilitarized Zone (DMZ), the South used to operate more than 60, plus general outposts just south of the DMZ, while the North has more than 160 guard posts, he said. 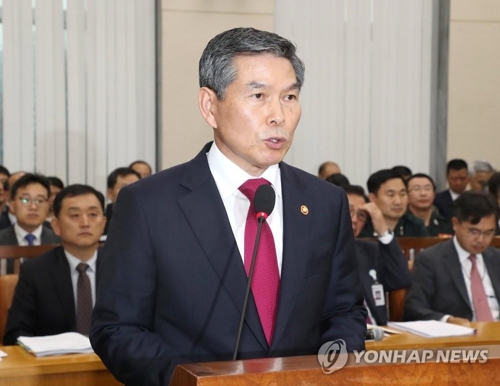 Each Korea completed the withdrawal of troops and equipment from 11 guard posts Sunday.

As to the cost of the implementation of the military deal, the minister said he has requested a total of 10.1 billion won (US$8.87 million) in next year's state budgetary funds.

"Disarming the JSA has been handled in this year's budget and everything can be resolved with 10.1 billion won (in 2019)," he said.

He added the U.S. is in "active support" of the military agreement between the two Koreas, recalling his talks with Secretary of Defense Jim Mattis for the annual Security Consultative Meeting at the Pentagon last month.

"I can say with confidence that there's no crack between South Korea and the U.S. (on the issue)," Jeong said.

South Korea's military has also begun mobilizing excavators to tear down 10 of its 11 posts instead of dynamiting them. It plans to maintain one bunker along the east coast, which was established shortly after the 1953 cease-fire. The North will also preserve a guard post site.

"The irreversible demolition of guard posts is the most tangible and symbolic measure to fundamentally prevent accidental clashes between South and North Korea and build confidence," he stressed.

He added his troops will push for ways to fill in potential loopholes in their defense posture from the deactivation of the guard posts. 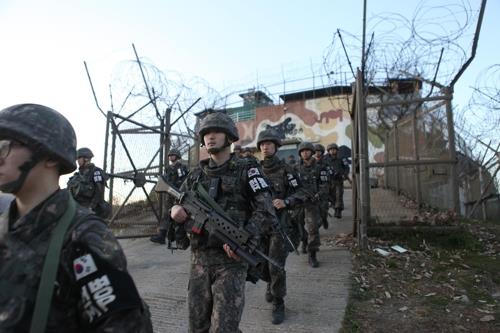 Meanwhile, military officials from the Koreas and the United Nations Command (UNC) had working-level consultations Monday on disarming the JSA.

The trilateral session at the Freedom House, located on the southern side of Panmunjom, was meant to discuss the operation of surveillance equipment there.