Cheong Wa Dae added that it's going too far to call the North's continued activity a "great deception" given that it has no specific agreement to dismantle or disclose the facilities mentioned in the report issued by Beyond Parallel, a group at the Center for Strategic and International Studies (CSIS).

The group said it has located 13 out of an estimated 20 missile operating bases undeclared by the secretive communist regime.

"The dispersed deployment of these bases and distinctive tactics employed by ballistic missile units are combined with decades of extensive camouflage, concealment and deception practices to maximize the survival of its missile units from pre-emptive strikes and during wartime operations," the report said. 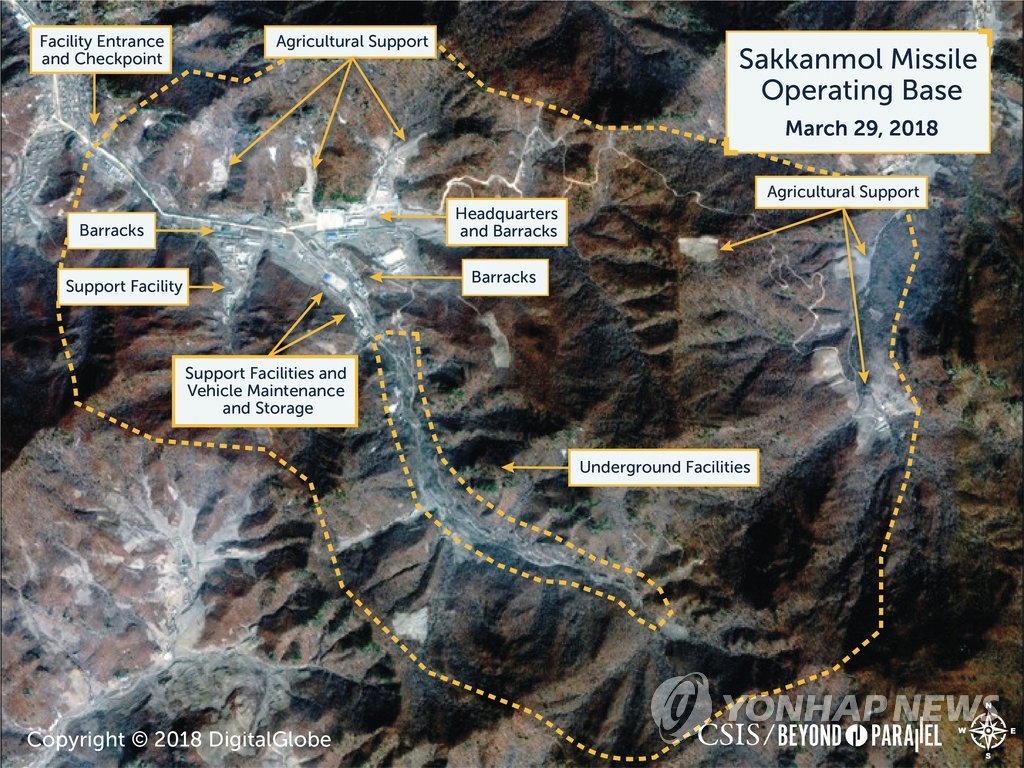 It said the report is largely based on satellite imagery and a number of interviews with North Korean defectors, as well as government, defense and intelligence officials worldwide.

It focused on the Sakkanmol missile base for short-range ballistic missiles (SRBMs), presenting a set of related commercial satellite photos taken in March.

The base in the Tactical Belt in North Hwanghae Province is located 85 km north of the Demilitarized Zone (DMZ) and 135 km northwest of Seoul.

Speaking about the report, Cheong Wa Dae spokesman Kim Eui-kyeom pointed out that the source of the analysis of the Sakkanmol base is a commercial satellite.

"The intelligence authorities of South Korea and the U.S. have far more detailed information from military satellites and are closely monitoring (it)," Kim said.

The North has not promised to shut down the base, and there has been no accord or negotiations in connection with it, he stressed.

Rather, Kim said, the existence of such a missile site shows the need for talks with North Korea to get rid of its military threats.

In Singapore summit talks with President Donald Trump, the North's leader agreed to permanently close the Sohae satellite launch facility near the border with China, also known as the Dongchang-ri missile base.

The CSIS report said the future of the long-range missile base, while gaining much media attention, obscures the military threat to U.S. forces and South Korea from Sakkanmol and other undeclared ballistic missile bases.

It came amid lingering doubts about whether the North will submit a full list of its nuclear and missile programs and engage in serious denuclearization talks in spite of Trump's all optimistic statements, including the talk of his good relationship with Kim.