SEOUL, Nov. 13 (Yonhap) -- President Moon Jae-in left for Singapore Tuesday for annual summits with Southeast Asian nations and their dialogue partners as he strives to bolster relations with the region and drum up international support for his initiative for peace with North Korea.

During the four-day visit, Moon is scheduled to attend a trio of annual summits hosted by the Association of Southeast Asian Nations (ASEAN) -- a Korea-ASEAN summit, an ASEAN Plus Three summit also involving China and Japan and the broader East Asia Summit.

Presidential officials said Moon plans to propose holding a special Korea-ASEAN summit next year to further solidify relations with the Southeast Asian nations under his "new southward policy." Moon also plans to host a separate summit between Korea and the Mekong River countries of Laos, Cambodia, Myanmar, Vietnam and Thailand.

Officials said the trip to the city-state is aimed at upgrading cooperative relations with ASEAN through expanding trade and people-to-people exchanges, strengthening regional crisis management capabilities and speeding up discussions on how to respond jointly to the fourth industrial revolution. 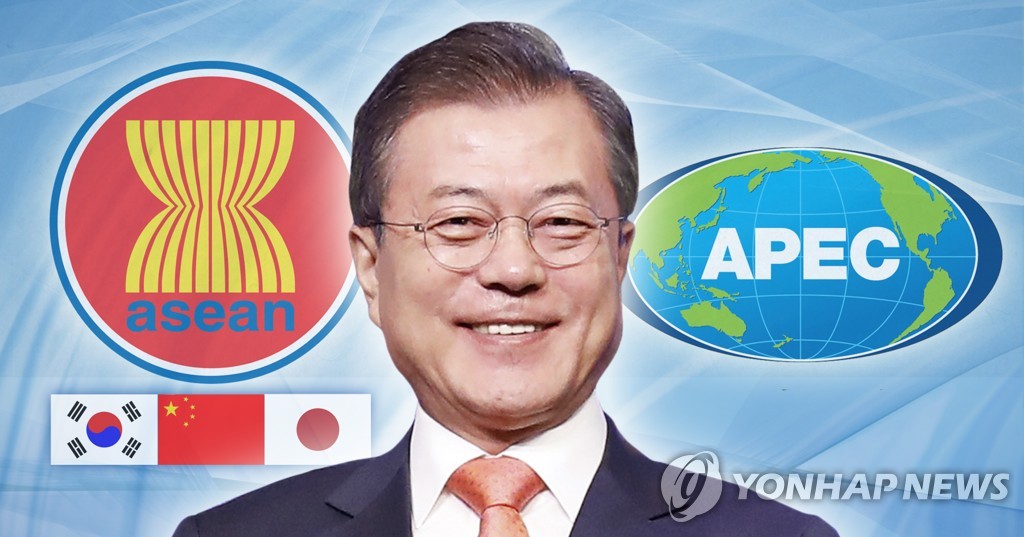 Singapore is the first leg of Moon's six-day trip that will also take him to Papua New Guinea on Saturday and Sunday for this year's summit of the Asia Pacific Economic Cooperation (APEC) forum involving Pacific Rim nations.

During the APEC summit, Moon plans to outline his vision for an innovative and inclusive nation and propose creating a joint fund, the APEC Digital Innovation Fund, aimed at improving the region's digital capabilities, officials said.

On the sidelines of the ASEAN and APEC summits, Moon also plans to hold a series of one-on-one meetings with other world leaders, including Russian President Vladimir Putin and Australian Prime Minister Scott Morrison.

Officials said that discussions are underway to set up a meeting with U.S. Vice President Mike Pence on the margins of the ASEAN-related summits, and a meeting with Chinese President Xi Jinping on the sidelines of the APEC summit.

Moon and Putin last met in June, and the summit with Xi will mark the first between the two in nearly a year after they last met in December last year. Moon plans to use these bilateral meetings to exchange information on North Korea's denuclearization negotiations and ask for support to move the peace efforts forward.
(END)