The 75-ton thrust, single-stage rocket, developed by the Korea Aerospace Research Institute Province (KARI), was originally set to be launched on Oct. 25 from the Naro Space Center in Goheung, South Jeolla Province, the Ministry of Science and ICT said.

The ministry said it convened a meeting of experts earlier in the day to fix the date, with an extended launch window set from Nov. 29 through Dec. 4 in case bad weather or minor problems cause a delay.

The launch was earlier suspended as abnormal readings were detected in the rocket propellant pressurization system.

The rocket was set to fly for about 10 minutes, during which the performance of the new engine, flight controls and other parts were to be monitored, the ministry said. If successful, four of the indigenous thrust engines will grouped together on the first stage and one on the second stage of the three-stage Korea Space Launch Vehicle-2 (KSLV-2), KARI said. The whole rocket is scheduled to blast off in 2021. 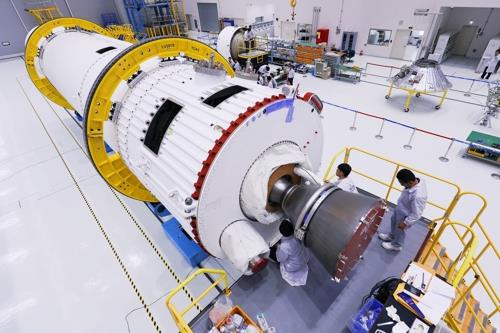