GUNSAN, South Korea, Nov. 16 (Yonhap) -- A reservoir on the south bank of the Geum River has stayed idle except when it stores heavy rain to prevent flooding in the nearby industrial complex in Gunsan, a southwestern port city.

The coastal reservoir has recently found a new role: The nation's largest floating solar farm was built on the surface of the water, covering a space the size of three football pitches.

Over 50,000 photovoltaic (PV) panels are used at the 18.7 megawatt solar farm, which can produce electricity for approximately 7,450 homes annually.

Park Sik, CEO of DNI Corp., the largest shareholder of the solar facility and the operator of a wind power plant in the complex, says he proposed building a floating solar plant two years ago to utilize the idle water.

"I couldn't find a better place to build a floating solar farm than here," Park told reporters during a recent visit to the plant. "The reservoir maintains a similar level of depth throughout the year and does not cause complaints from nearby residents. Plus, it is located near an industrial complex and a substation." 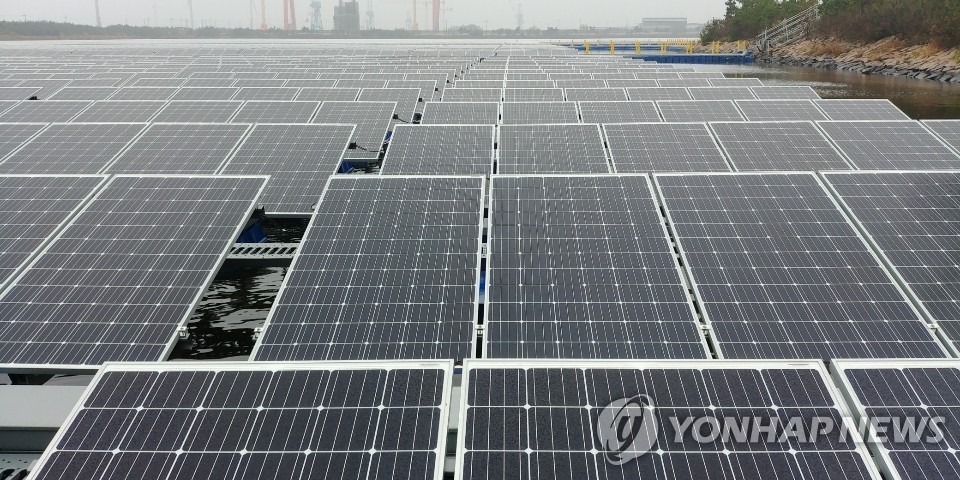 Since its opening last month, the floating solar farm has produced power for an average of 3.7 hours per day, which accounts for 15 percent of its maximum utilization rate.

A rainy day may not be the perfect day to visit the power plant, but it afforded an opportunity to confirm that the solar panels still managed to generate some electricity.

The floating solar facility, the world's second largest after one in China, showcases South Korea's latest efforts to reduce its reliance on fossil fuel and expand the use of clean energy.

The government has set a target to nearly triple the portion of renewable energy to 20 percent by 2030. The road map calls for adding 30.8 gigawatts of solar and 16.5 GW of wind power to have a total renewable capacity of 63.8 GW by 2030, which would require vast areas of space across the nation.

In a mountainous peninsula surrounded by sea on three sides, the floating solar farm is considered an attractive renewable model as it costs less to set up and has less environmental fallout.

Industry officials say the scarcity of land and growing regulatory measures for effective utilization of water bodies are expected to act as catalysts for the nation's floating solar panel industry expansion.

"A floating solar farm is more efficient in summer because water cools down heat from the modules and panels actually prevents algae growth," Park said. "It is more eco-friendly than a solar power station on mountains, which requires the cutting down of trees and could cause landslides in heavy rain." 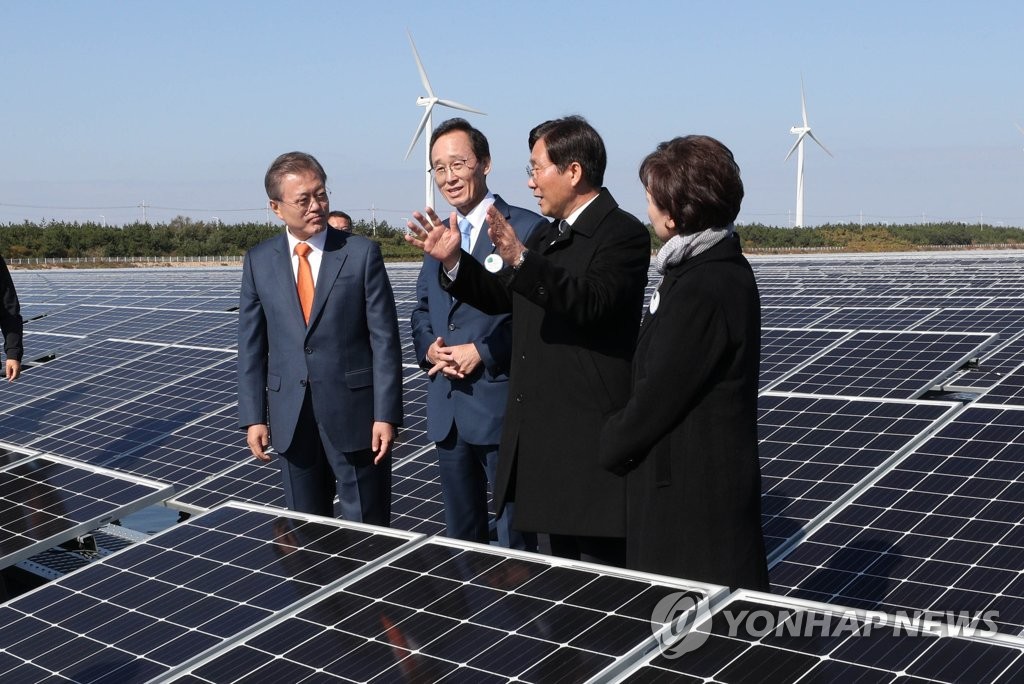 While some have raised concerns over potential water contamination, experts say past studies have shown exposure to floating panels hasn't caused harm to marine life.

The Korea Environment Institute conducted environmental tests on a floating solar farm in Hapcheon Lake in South Gyeongsang Province on two occasions from 2011 to 2014 and concluded it didn't have any negative impact on the ecosystem.

"So far, study results show that floating solar farms haven't reduced the number of fish or other life in the water. Fish rather flock under solar panels in summer, which makes a good spot for anglers," said Kim Pil-gyu, a senior engineer from the state-run Korea Testing Laboratory's renewable energy technology center. "But we have to trace its ecological impact for at least 10 years."

Solar modules are packed inside tempered glass and workers clean the panels with rain water or tap water, posing little risk of contamination, Kim pointed out.

With the government's proactive plans and commitment toward a renewable energy expansion, a growing number of companies have shown interest in building floating solar farms in the region.

On Oct. 30, President Moon Jae-in announced ambitious plans to establish one of the world's biggest renewable energy production complexes on the Saemangeum reclaimed land next to the Gunsan Industrial Complex.

"Renewable energy is healthy energy that protects the safety of the people, and it is also a new growth industry of the future," Moon said during the ceremony held at the floating solar farm.

Under his vision, the state-run Korea Hydro & Nuclear Power Co. said it will push to build one of the world's largest floating solar farms and associated energy grid system in Saemangeum.

All of this renewable push provides a good chance for waning manufacturing hubs like Gunsan, which has suffered a high unemployment rate and sluggish economy after Hyundai Heavy Industries Co. closed its shipyard in 2017 and the Korean unit of General Motors shut its factory in May.

"I hope the renewable development project can create jobs and boost the local economy," Moon said. "I hope the Saemangeum project will provide a turning point for upgrading South Korea's renewable energy competitiveness in the global market."