In his speech at a forum in Washington, Minister Cho Myoung-gyon also urged the United States and North Korea to have more patience and dialogue to build mutual trust.

"I understand some critics argue that the progress in inter-Korean relations has been way too fast while there has been no progress in North Korea's denuclearization," Cho said. "The situation now is similar to (the) natural flow of a river that was once blocked for long time."

"We are investing our efforts to ensure that ongoing inter-Korean projects will contribute to the process of North Korea's denuclearization. We are coordinating closely with the U.S. and the international community, and within the framework of multilateral sanctions," he added. 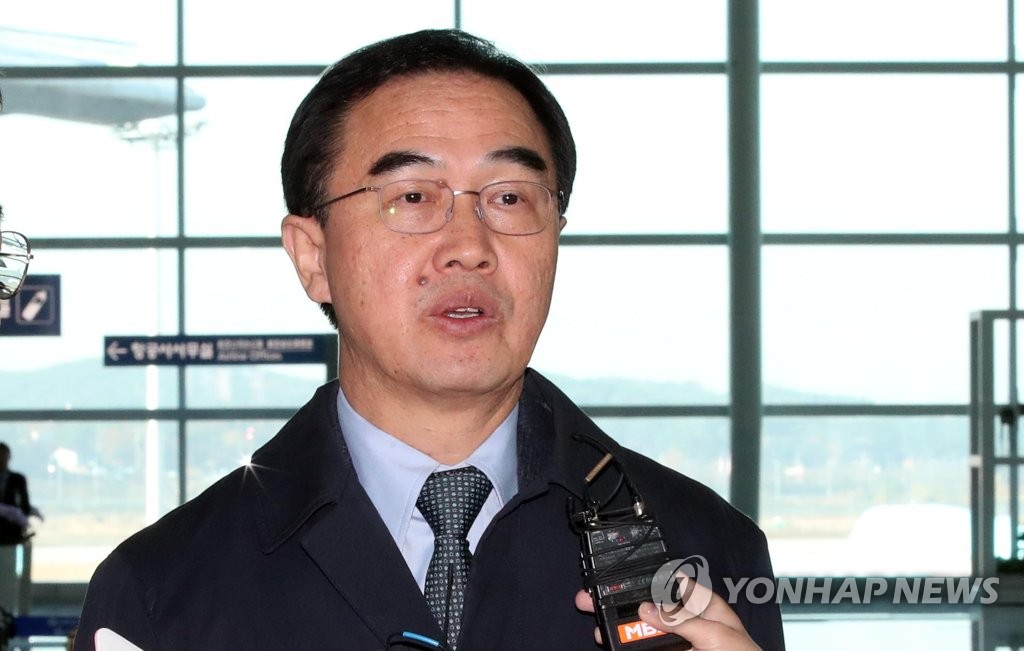 Cho is in Washington as part of a five-day trip to the U.S., during which he is expected to meet top U.S. officials and Korea experts. His remarks came amid speculation over possible differences between the two allies in their approach in dealing with North Korea.

South Korea has been eager to expand cross-border exchanges, which have been blocked by sanctions on Pyongyang. The U.S. has said that sanctions will remain in place until the North completely gives up its nuclear weapons program.

Joint projects between South and North Korea, such as railway and road connections over their border which their leaders earlier agreed to, have been all but stalled.

Cho reiterated Seoul's argument that an improvement in inter-Korean relations and denuclearization of the North should go hand in hand.

"We will push for a positive cycle of developing inter-Korean relations and the denuclearization of North Korea without changing our fundamental position. Under this process, communication and coordination between the Republic of Korea and the U.S. will be the baseline principles," he said.

He expressed hope that the recently canceled high-level talks between the U.S. and North Korea will be rescheduled soon so as to make progress in denuclearization talks. He also urged both sides to have more "patience" and "dialogue" to deepen their mutual understanding.

Cho also cautioned against being overoptimistic about the denuclearization process.

"Negotiations for the denuclearization of North Korea are still a work in progress. There is long way to go, and we have many tasks to solve. It is the common duty of the Republic of Korea (South Korea) and the U.S. to find a solution and develop it to a level so that it will be irreversible," he said.