Kim examined and guided the master plan for Sinuiju before setting forth the tasks and ways of successfully sprucing up the border gateway city to meet the demand of the present era, according to a report by the Korean Central News Agency (KCNA).

Sinuiju, located in the North's northwest and just across the Amnok (Yalu) River from Dandong in China's Liaoning Province, is widely regarded as a symbol of North Korean-Chinese economic cooperation and exchanges. 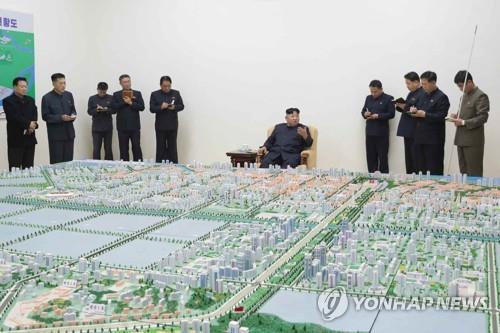 Watchers speculate that North Korea appears to have begun to build urban infrastructure in the border city in preparation for an improvement of external circumstances and full-fledged economic cooperation with China.

The North's leader reportedly said that it is necessary to successfully arrange blocks of high-rise and skyscraper apartment buildings along the main axis and arterial road of the city and the bank of the Amnok River in an artistic way, as well as building many parks in the area.

Kim called for successfully arranging public buildings, such as theaters, cinemas, sports villages, ice rinks, science and technical libraries, and service facilities, including hotels and department stores, in a rational way in order to turn Sinuiju into a gateway city, the KCNA said in an English dispatch from Pyongyang.

He also ordered an upgrade of the city's present industrial areas and remodeling of its railway station and airport in a modern way, it said.

North Korea experts in Seoul say that Kim seems determined to build Sinuiju as a city comparable to Pyongyang, the capital city, as part of his campaign for economic development. They say the North's leader may also have signaled his intent to earnestly push for economic cooperation with China through the development of the border city.

"Chairman Kim Jong-un is pushing for economic reform and opening with Sinuiju at its center. North Korea aims for urban development of Sinuiju ahead of its opening in order to maximize the effects of its economic cooperation with China and South Korea," Park Jong-cheol, a professor of Gyeongsang National University, said.

Cho Bong-hyun, assistant director of the IBK Economic Research Institute, said North Korea appears to be closely consulting with China on the development of Sinuiju and may push to launch the construction next year.
(END)