Individual and institutional investors picked up 18.2 billion won and 10.3 billion won of local shares, respectively, to pull the index up, while foreigners shed 20.8 billion won worth of stocks.

The index got off to a strong start tracking overnight gains on Wall Street. The Dow added 0.83 percent and the tech-heavy Nasdaq climbed 1.72 percent.

The market trimmed earlier gains but managed to maintain the momentum throughout the session as institutions turned net buyers and buying by individual investors was solid.

"The U.S. market closed higher on chip shares and as Apple rebounded, which affected the local stock market in a positive way," said Seo Sang-young, an expert at Kiwoom Securities. "Increased hopes for an eased trade war between the U.S. and China were also a positive factor."

The media reported that China has delivered a written response to the U.S., affecting investors' sentiment that possible negotiations could lead to an end of the ongoing trade friction between the world's two largest economies.

Large caps on the KOSPI were mixed at the close.

The local currency closed at 1,128.5 won against the greenback, up 0.7 won from the previous session's close.

Bond prices, which move inversely to yields, ended mixed. The yield on three-year Treasurys added 0.4 basis point to 1.947 percent, and the return on benchmark five-year government bonds was down 1.6 basis points to 2.055 percent. 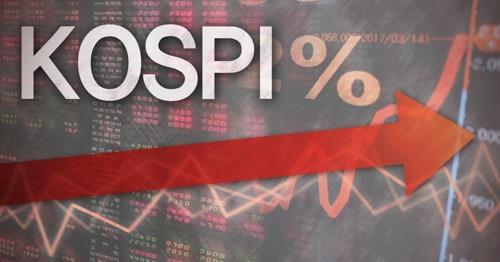