SEOUL, Nov. 17 (Yonhap) -- The leaders of South Korea and China agreed to work closely together for the success of a possible second summit between the United States and North Korea during their talks in Papua New Guinea on Saturday, Seoul's presidential office said.

President Moon Jae-in and his Chinese counterpart, Xi Jinping, met to discuss peace efforts on the Korean Peninsula and other issues on the sidelines of the Asia Pacific Economic Cooperation (APEC) forum in the Pacific island country.

Washington and Pyongyang have been seeking to arrange a second summit between U.S. President Donald Trump and Kim to make progress in their lackluster negotiations on Pyongyang's denuclearization, though such efforts appear to have made little headway.

Seoul has been expecting Kim to make an unprecedented trip to the South to reciprocate Moon's visit to Pyongyang in September for their third summit.

The Moon-Xi summit came as the South Korean leader pushes to elicit international support to keep Pyongyang on a denuclearization track amid growing skepticism over the prospect of its nuclear disarmament.

At the talks, Xi threw his support behind Moon's efforts to establish peace on the peninsula, saying China will continue to play a "constructive" role.

Xi said he has received the North Korean leader's invitation to visit Pyongyang and that he is considering traveling to the North next year.

Xi also expressed his intention to actively support the Koreas' push to jointly host the 2032 summer Olympics, saying that it will contribute to the development of cross-border relations and the establishment of peace, Moon's spokesman said.

Commenting on the 100th anniversary of the establishment of Korea's provisional government in China during Japan's colonial rule of the peninsula, Moon called for Beijing's continued interest and cooperation in preserving the historical sites of Koreans' independence movement.

Xi said he would actively cooperate.

The leaders also decided to actively pursue a project to repatriate the remains of Chinese forces that are thought to remain in Korea after the 1950-53 Korean War. They called the project a "symbolic" one that represents the improvement in bilateral relations and trust.

In addition, they agreed to make joint efforts to tackle environmental issues, including fine dust pollution, and strive for progress in their negotiations over a bilateral free trade agreement to achieve a "mutually beneficial conclusion."

Moon invited Xi to visit Seoul at an early date. Xi said in turn that he is willing to visit the South at a convenient time next year.

Their latest summit started with an exchange of views on the ongoing peace efforts.

"As the two countries' strategic interests of peace and prosperity in Northeast Asia coincide, I hope we can cooperate more closely on the development of China-South Korea relations and the peace process on the peninsula," Moon said.

Noting the opening of an "unprecedented era of peace" on the peninsula this year, Moon expressed his appreciation for Xi's "constructive role."

The Chinese leader said in turn that bilateral cooperation on stabilizing the situation on the divided peninsula has been "very effective."

"In terms of cooperating with neighboring countries, pursuing peace and safety on the peninsula and implementing an equal, fair order, China and South Korea have similar positions," Xi said.

He then stressed the need to strengthen bilateral "strategic communication," which he said serves the two countries' shared interests.

"We should continue to play a positive role in continuing to deepen the two countries' strategic communication and maintaining an enduring peace and prosperity in this region," he said.

Observers anticipated that the two sides might discuss how to bridge the gap between Washington and Pyongyang in their nuclear negotiations.

The North has sought U.S. concessions vis a vis its demands for a declaration of a formal end to the Korean War -- apparently as a way to guarantee its regime security -- and sanctions relief.

But the U.S. has insisted that Pyongyang should first take concrete measures, such as a full declaration of its nuclear and missile programs, before any rewards could be given, particularly amid reports that the reclusive regime is continuing its weapons program.

The two leaders last met in December, when Moon made a state visit to Beijing. 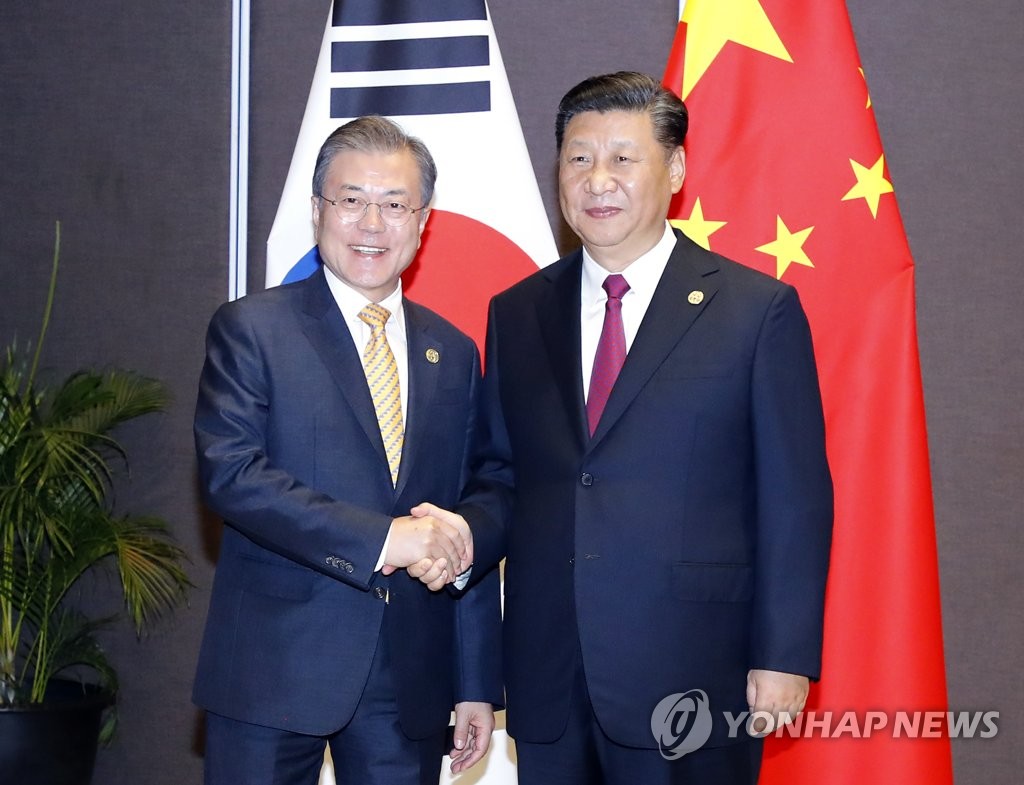