SEOUL, Nov. 18 (Yonhap) -- South Korea and the United States are expected to launch a new consultative body to coordinate their efforts on denuclearization of North Korea this week, diplomatic sources here said Sunday.

They said Seoul and Washington have agreed in principle to hold the first meeting of the bilateral "working group" during an upcoming visit to the U.S. capital by Lee Do-hoon, Seoul's top nuclear envoy.

Lee, special representative for Korean Peninsula peace and security affairs, will be in Washington from Monday to Wednesday. According to the sources, Lee will be joined by officials from the unification ministry and the presidential office of Cheong Wa Dae who will be part of the working group.

Lee and his U.S. counterpart, Stephen Biegun, will represent their respective sides for the working group.

The new consultative body is expected to discuss preparations for a planned meeting between U.S. Secretary of State Mike Pompeo and his North Korean counterpart, Kim Yong-chol.

Pompeo and Kim were scheduled to hold talks in New York earlier this month, but the meeting was abruptly postponed at the request of North Korea due to what the U.S. called scheduling issues.

The working group is also expected to go over inter-Korean exchange programs, including a proposed joint survey of cross-border railway lines. The Koreas had planned to conduct the inspection in October but the U.S. expressed concerns that the inter-Korean relations were improving faster than denuclearization talks with Pyongyang.

A Seoul government official told South Korean correspondents in Washington last Thursday that South Korea and the U.S. could narrow their differences through their new working group and it would open the doors for the joint railway survey. 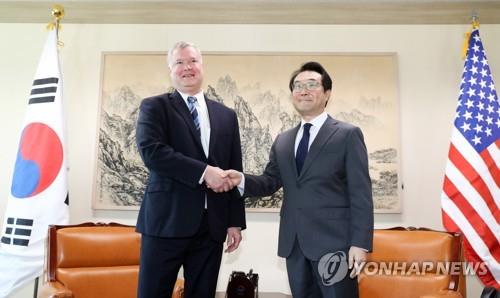