SEOUL, Nov. 19 (Yonhap) --- South Korea and the United States failed to reach a deal on sharing the cost of American troops stationed on the peninsula in formal negotiations last week, a government official here said Monday.

Senior diplomats of the two sides had three-day talks on the Special Measures Agreement (SMA) to set the amount of Seoul's financial contributions for the 28,500-strong U.S. Forces Korea (USFK) in Honolulu, Hawaii. It was the ninth round of bargaining, as the existing accord, which took effect in 2014, is to expire at the end of this year.

"There was some progress, but no final agreement was reached," the foreign ministry official told reporters on the condition of anonymity.

Differences remain over how much Seoul will pay and some other issues, although the work to draw up a joint statement moved forward in general, he added. 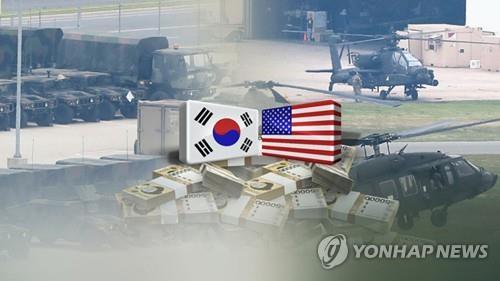 He also likened the process to mountain climbing, saying the toughest moment is just before reaching the peak.

The allies plan to have the next round of talks in South Korea in early December. The official said Seoul still aims to wrap up the talks before the year's end.

Washington has called for Seoul to sharply increase its contribution from the current 960 billion won (US$850 million) a year.

"Our goal, of course, is to minimize (a hike)," the official said, ruling out the possibility of a decrease in Seoul's burden.

For South Korean taxpayers, the 1 trillion-won mark is psychologically important, although they admit the role and significance of the USFK in the defense of their country.

A problem is there's no data, agreed by the allies, on the current ratio of South Korea's financial burden, which the U.S. claims stays below 50 percent.

Thus, South Korean negotiators do not take it into account and instead consider the volume of this year's contribution.

In the SMA talks, South Korea is represented by Chang Won-sam, a career diplomat who served as ambassador to Sri Lanka, and his counterpart is Timothy Betts, deputy assistant secretary of state for plans, programs and operations.

A new defense cost-sharing agreement will come under scrutiny by the National Assembly before its decision on whether to approve it or not.

The allies began negotiating the issue in 1991.