The Ministry of Gender Equality and Family, which governs the foundation, made the announcement in a press release that it will carry out a legal process to dismantle the Reconciliation and Healing Foundation.

"We, along with the Ministry of Foreign Affairs, have consulted with the relevant offices on how to handle the foundation and collected various opinions. Based on the current situations of the foundation and the review results, we have decided to close it down," it said.

"We will try our best in setting up policies to recover the honor and dignity of the victims," Minister Jin Sun-mee said.

The planned shutdown is seen as Seoul's move to effectively discard a 2015 accord between the neighboring countries on the "comfort women" issue.

It is also expected to put a strain on the relations with Tokyo, which suffered a hit following a recent Seoul court ruling in favor of wartime forced labor victims.

Historians say as many as 200,000 Korean women were forced into sexual slavery by the Japanese military during World War II. Korea was under Japan's brutal colonial rule from 1910 to 1945.

In late 2015, the Park Geun-hye administration signed the agreement to resolve the historical issue. They launched the foundation, intended to help the victims and their families, the following year with the 1 billion yen (US$8.9 million) contribution from Japan.

A total of 4.4 billion won has since been handed out to 34 surviving victims and 58 families of late victims.

The liberal government led by President Moon Jae-in decided to reconsider the agreement as it failed to adequately reflect the voices of the victims and to replenish the fund with its own budget.

The operation of the Japan-funded foundation virtually came to a standstill after all of its civilian board members resigned their positions.

As of the end of October, 5.78 billion won still remains in the foundation's coffers. The ministry said it will continue discussing what to do with the remaining funds with the interested parties, including the victims and civic groups. The Ministry of Foreign Affairs will consult with the Japanese government on the issue, it said.

Among the government-registered 240 victims, only 27 are still alive. 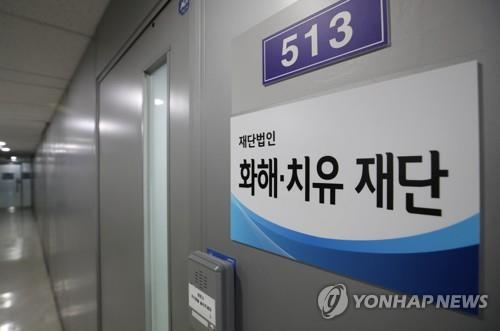